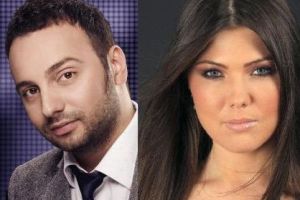 Welcome to our live blog of the Romanian National Final –Selecţia Naţională. The show begins at 19:30 CET. It comes live from the city of Brașov and you can follow our LIVE BLOG here by just refreshing the page

12 Acts compete for the honor to represent Romania at Eurovision 2014 and you can watch the show live on Eurovision.tv HERE

Welcome Eurovision Guys and Gals. Garrett here to guide you through tonight’s festivities in Romania.

We are on the “Red Carpet” – not in the “E – Live from the Red Carpet Way” and I am certainly not Ryan Seacrest.

Hats are all the rage in Romania by the looks of it. The poor guests are arriving for the show and they are being accosted by the 2 interviewers. It is Beauty and the Beast!

A rather excitable presenter who will hopefully sustain our energy levels for the show.

Ok we are onto our 5th presenter in as many minutes! The staffing bill must be MASSIVE

Ok – shall we make this a short night and just had the trophy to Paula and Ovi? A great start to the show. They used 3D cameras to create another Paula and Ovi whom they danced with. I know I had a few drinks last night but I thought I was seeing double.

Great vocals and good interpretation of the song. Plenty of singing loudly up close to each other. Paula hit some notes that were from the Mariah carey songbook. The audience loved it and rightly so

Sea Horses were the backdrop for this song. A pleasant electro pop mid tempo song. Sea Horses mate for life so I am hoping that goes for the make and female singers of this song.

However Sea Horses are almost extinct due to hunting them down for Chinese medicine. I fear that this song might struggle to make an impact at Eurovision

Just what every song needs – a children’s entertainer performing birthday magic tricks. Completely bizzare and as necessary as a hair brush for Kojak!

The band themselves looked like they should be on Romania’s Next Top Model. A forgettable song that went downhill with the man with his bag of tricks – not that often I say that!

I wasn’t expecting this rapping popera song with a clarinet and a man that looked like Vin Deisel after the Chronicles of Riddick and a few Big Mac Meals, The female singer had a mature Britney Spears “Circus” vibe going on – complete with Ring Master silver costume.

This sounds terrible on paper but I loved this funky little ditty. It hasn’t a chance in winning but I would dance to that at Euroclub in Copenhagen.

By far the best song so far as I could only hear the song. A soulful and funky song with a hint of Curtis Steigers vocals. I was getting my groove on and then the picture cam back on my screen.

A man in a top hat, tails and pyjama bottoms holding a sorry bunch of flowers and what looked like a book. All wrong presentation for this funky gem.

Feeling : Fantastic – if I keep my eyes closed!

What has happened this song. It has been given an injection of a 60’s Du Opp. Look this has your stereotypical Eurovision stamp of quality over it.

The wind machine was used for the full song and there were 3 males dancers doing weird routines but it strangely worked.

Feeling : Where the hell did that one come from!!

This went from elevator music to stripper rock and back again. The dress was half removed for the song. This is a song with an identity crisis as it certainly doesn’t know what it wants to be.

Nothing endearing about that performance but the polite Romanian Audience clapped.

Feeling : I need to see my therapist as I don’t know what I just witnessed!

A singer with 2 MC’s. It would help if the singer was in tune and if I could see the eyes of the rappers! Never trust a man on TV with sung glasses!

“Letting Go” I think is a statement of intent as they are letting go of the chance to win the competition.

Feeling : Letting go of this musical cliff edge I am strapped to

This was the song i was looking forward to seeing performed live tonight as the studio version is wonderful. However when sung live it lost some of its appeal.

Not so much atmospheric but more moody. The audience loved it but I think it lost some of its spark tonight

Feeling : Like I cannot “Breathe” with the slight disappointment

Oh my ears my ears. The backing singer is calling all dogs in a 50 mile radius. Oh hang on – Naomy wants to get in on the act too with that last ever climbing note of the song. The perfect way to leave a bad taste in your mouth.

A forgettable song and an ear-piercing experience.

Ok – is this Strictly Come Dancing  as we have a dancing couple pulling tricks around Mirela as she sings. Oh who am I supposed to pay attention to – Ahhhhh decisions decisions. Oh now a barefooted dancing accordion player. Are we at Romania’s Got Talent auditions.

What was that? It was like a watered down Winny Puhh or a diet version. It lacked the bite of the Estonian rockers! one man on electric guitar and 4 dancers/singers in traditional clothing spinning around. I am sure it is a strong local tradition but it was somewhat lost in translation for me.

The crowd loved it and they even had their banners for the song flying high! Not an International Winner but who knows what the locals will vote for.

All songs performed and the voting lines opened

Now a look back at former Romanian Eurovision Entries. Mihai Traistariu is talking about his 2006 experience. Hopefully we will see him next year in the National Selection

They showed the number of votes that each act had received for a split second on the screen.

The shock news was that the leader was Mirela Vaida Boureanu – “One more time” with over 7 thousand votes and in second place were Paula and Ovi with a little over 2 thousand votes!

Luminatu performing a second Interval song – “Non, Je ne regrette rien”. Now she is lip syncing like several of the Interval acts but gives it welly!

All the acts are brought back onto the stage for the announcement!

Is this the year that Romania Wins Eurovision?