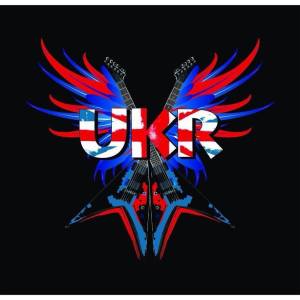 United Kingdom – “It’s either United Kingdom of Rock or Geri Halliwell for Eurovision 2014” were the words from rock front man Matt Fielder on BBC Radio Surrey this morning.

The rumours of the metal band “United Kingdom of Rock” being a potential UK Eurovision artist have surfaced over the past few days and our friends at Eurovision Apocalypse wrote on the band last Sunday – you can read here. Since then there have been several official press releases stating that the band are in the running to represent the United Kingdom at Eurovision 2014 – See Here

This morning at 7:25am on BBC Surrey Radio, Matt Fielder was interviewed on the James Cannon Show where he spoke of his meetings with the BBC regarding the United Kingdom of Rock (UKR) being shortlisted to represent the UK at Eurovision 2014.

He has assembled the 6 piece band that includes Laurence Archer who played with legendary Irish rock singer Phil Lynott of Thin Lizzy fame. He said the idea came to him last year while in hospital

“where I made a bucket list of things I wanted to do – and being a fan – Eurovision was one of them.”

You can listen to the interview on the BBC iPlayer later today HERE – Just click on the James Cannon Show from January 14th and go to 85 minutes into the show.

Want to hear their recent song that they might like to send to Eurovision – here you go. Let us know what you think of the song.

There are several other potential names being mentioned in the media from Geri Halliwell to Rylan Clark to a Gary Barlow penned song for either Olly Murs or female singer A*M*E (that Barlow is mentoring).

“something good” and added that his music is “probably just getting revved once something is signed on the dotted line”.

All the details can be read HERE

It will be interesting to hear what BBC Central will say to the UKR interview on local BBC Surrey radio – we will let you know.