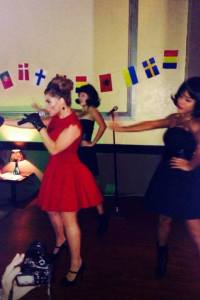 Several weeks ago we introduced you to Gilad Mandelboim – one of the organisers of the “Europhoria” New York Eurovision event and Fan Club. Well last Saturday the guys in NYC partied until the early hours of Sunday morning and the amazing Annet Artani (Cyprus 2006) was on hand to entertain the “Europhoria” crowd.

From the videos and pictures it was clear that Eurovision is certainly alive and kicking in America. Annet treated the audience to her song “Why Angels Cry” that she performed at Eurovision 2006 representing Cyprus. After that she performed the song “You Got What I Need” that is in the Swiss national selection for 2014. This Friday Annet will find out if she is one of the lucky 18 acts that have made it through to the SRF second round of selection.

Dressed in Old-School Hollywood glamour, she definitely wowed the crowd with her performances. “You Got What I Need” is certainly a song that is best enjoyed live – hopefully the voting public included Annet in their top 18.

From all accounts the Europhoria night was a huge success in its new venue of The Stellan Bar and Lounge. Congratulations to Gilad Mandelboim and Saf Dogan on yet another amazing “Europhoria Event”. Make sure to follow them on their Facebook page for all Eurovision news and events in America. All details you can find in our previous article here.

America with its European diaspora is beginning to fall for the charms of Eurovision.