This is how much we love EUROVISION – Part 1

How can one measure their love and passion for Eurovision? To what extreme measures will you go to show your devotion? Oh well the team here at Eurovision Ireland have excelled themselves at the UK Eurobash this year in Manchester last weekend.

Dollie Deluxe and Bucks Fizz getting ready for their Eurovision Performances. Photograph courtesy of Schlagerboys Facebook

You all know our writer, Eurovision connoisseur and “Prosecco Queen” – Elaine Dove! Well she and 3 friends took to the stage to become “for one night only” the 1981 winning Eurovision Act Bucks Fizz with the song “Making Your Mind Up”.

Elaine put her life on the line for her love of Eurovision – no literally she did? Watch out for the unintentional stage dive before the performance has even started. It put Latvia’s “Groupa Per” to shame as there was nobody there to catch her! Rock N Roll.

Josh James aka Josh Dubovie who represented the UK at Eurovision in 2010 with “That Sound’s Good To Me”, was at the event. Now if you all know Elaine she can be very persuasive. She even tried to lure Josh into the band – but he looked more Bon Jovi than Cheryl Baker with the wig on him. 10/10 for effort Elaine! 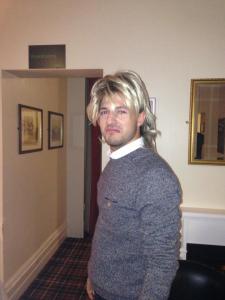 Josh James at Eurobash 2013 in the UK – summoning the spirits of Buck Fizz with Elaine’s props. Photograph courtesy of Elaine Dove Facebook

With months of practicing under her belt, Elaine was spotted dreaming of what act to channel in 2014. Dustin, Loreen or Dana – but which one? 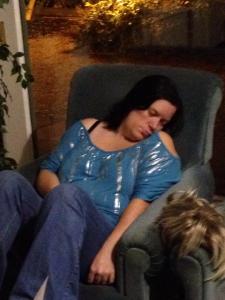 Elaine finished her role as Bobby Gee from Bucks Fizz and dreaming of “Who will I be in 2014?”. Photograph courtesy of Elaine Dove Facebook

So we thought it would be interesting to ask you the readers who Elaine should impersonate at Eurobash 2014? As we speak Elaine is taking a week’s holiday in a secret location away from the media spotlight to recover after the experience like any self-respecting Eurovision star!

Stay tuned for Part 2 as our other writer Andrew James Main was certainly not going to be outdone by Elaine!