HUNGARY – A Eurovision “Storm” is coming your way! 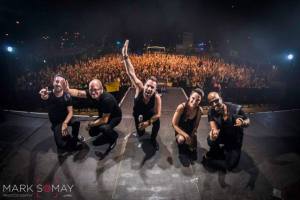 Fast becoming our favorite band from Eurovision in recent years – we have a “teaser” for you!

You know that we have lots of love for the guys from “Compact Disco” who represented Hungary at Euroviion 2012 – making the Grand Final. We recently recommended their song “We Will Not Go Down” to everyone as an amazing single – see here

Well the band are teasing us with the upcoming release of their new album “The Storm”. The 20 second teaser already has me sweating and breathing heavily as this is going to be an amazing album!

The band was earlier this month on “Class FM” in Hungary where they were debuting some of the new material from their upcoming album. We already know that “We Will Not Go Down” is on the album – which we think is amazing, but “The Storm” continues this wonderful 80’s yet current vibe that the band are experts in.

Strong melodies, infectious hooks, and a thumping bet that just makes you want to get up and dance – like hundreds of thousands of people have done on the band’s current tour of Hungary. Yes they like to tour and the public like to see them judging from the reaction from their fans.

Stay Tuned for more news on the band’s release of their new album. They are hitting all the right notes for us!