FRANCE – The real winner of Eurovision 2013 – with Social Media 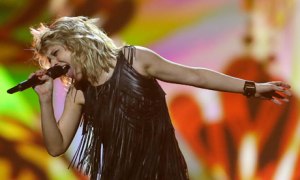 The real winner of Eurovision 2013 was France – well in the Social Network competition.

“France had perhaps the most impressive social TV showing of the competing countries. France Télévisions –  the official broadcaster of the Eurovision in France – offered viewers an immersive second screen experience to enhance a final event that lasted 3-plus hours.”

In their effort to keep their viewers engaged in the contest, France Télévisions used a desktop and tablets app, developed by Novedia Group.  During the show, content and interactive features were delivered dynamically via the app’s timeline, which included facts about the songs, insider photos, tweets , instant replays, animated gifts, and real-time polls. Now that is how to do it!

Across desktop and tablet, the app generated an impressive 1.6 million page views, and received 129,000 answers to the interactive polls. In addition, more than 182,000 tweets about the contest were sent from France.

This is certainly the way that the contest is moving forward. We had already written about the Irish Social Media Eurovision Experience this year. You can read it again here

Our suggestion is that France Télévisions uses this social media technology to connect with their viewers and public when it comes to selecting their next contestant for Eurovision 2014 as the desire and interest is certainly there in the French Public!