Today it was announced that the Greek National Broadcaster ERT was being closed down with immediate effect from midnight, with the loss of 2,650 permanent staff members and a further 250 short-term employers. Simos Kedikoglou (A Greek Government Spokesman) allegedly described ERT, as a “modern-day scandal” and “a unique case of lack of transparency and waste.”

Let us be very clear that ERT has NOT been implicated in any scandal – as has no other Greek National State organisation – but Mr Kedikoglou’s stern comments are seen as potentially trying to bolster Creditors confidence in the Greek Coalition Government’s commitment to make tough austerity budgetary cuts in the Greek state economy and state expenditure.

Unsurprisingly, passionate discussions took place on live ERT broadcasts throughout the day. None more so than on the midday news. Anchorman, Antonis Alafogiorgos, hit out at the government for accusing the state broadcaster of corruption saying “This hypocrisy has to stop!”.  This was followed up by the playing of a video from last month showing Mr. Kedikoglou insisting that the state would protect ERT from cutbacks. “None of us want the government to fall,” Mr. Alafogiorgos said, “but these methods are unacceptable.” Alafogiorgos finished by saying that he was not concerned for his own loss of job but for ERT to remain operational. “Mr. Kedikoglou can take my compensation and do what he wants with it,” he said.

The immediate effect is that “sit ins” from the major Unions have already begun in the offices of ERT. However the political instability that this has opened could be harder to rectify. The decision to close ERT was not debated in the Greek Parliament but was taken on the back of emergency powers being granted to the Finance Minister and the competent Minister.

The decision by the Conservative Party (the largest member of the Greek Coalition Government) has prompted deep unrest from the junior partners in the coalition government — the Socialist Party, known as Pasok, and the more moderate Democratic Left — which accused the dominant conservatives of failing to consult them, an increasingly common complaint.

“The public broadcaster cannot close,” Pasok said in a statement. “A three-party government cannot make decisions without the participation of all party leaders.”

What has this to do with Eurovision I hear you ask?

The President of the EBU, Jean Paul Philippot and the EBU Director General, Ingrid Deltenre urged Mr Samaras (Greek Prime Minister) in a letter “to use all his powers to immediately reverse this decision”. The letter highlights that Public Service Media is the heart of a democratic Society. “While we recognize the need to make budgetary savings, national broadcasters are more important than ever at times of national difficulty. This is not to say that ERT need be managed less efficiently than a private company. Naturally, all public funds must be spent with the greatest of care.” 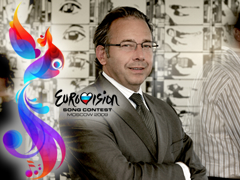 With no state broadcaster at this minute in time plus the potential future down sizing of ERT if it is to return – one has to ask if Eurovision 2014 would be top of their priority. Considering that this year ERT had to gain the assistance of Mad TV in order to stage their National Selection and trip of Malmo – how could one expect Greek parliament to sanction the cost of attending Eurovision 2014 and then the “nightmare financial scenario” of winning the contest and having to host 2015!

Could this be the first time Greece miss Eurovision since 2000?At this moment in time I would have to say that it is strong possibility. If it is the choice of providing employment to journalists and ERT staff versus attending Eurovision for a year – we all need to look at the bigger picture here and recognize that Eurovision will be here for a long time to come but Greece needs to ensure that ERT’s survival has to take priority.

This news is sure to send shock waves across other National Broadcasters – especially those who decided to sit out Eurovision 2013 and those who relied heavily on sponsorship like Cyprus and San Marino. Should this scenario come to pass could we find Eurovision 2014 returning to a one semi final contest or dare I say just a one-off show? With the ripples of the ERT situation to spread, we could be looking at a further scaled back Eurovision – which could see smaller venues in Denmark getting the green light to host Eurovision 2014 – where is Fredericia again? All possible scenarios that show the political and economic ties that Eurovision has.