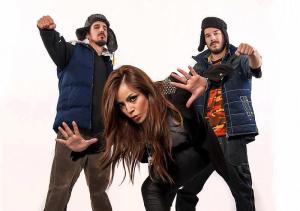 Montenegro will be represented at Eurovision 2013 by Balkan Hip Hop Legends “Who See” along with the Pop Princess that is Nina Zizic. They will be performing the song “Igranka”. When we heard the song for the first time we at Eurovision Ireland were very excited. If you are looking for a song that will make Europe sit up, listen and take note – then this could be your act.

With their official video for “Igranka” about to reach 1 million hits on YouTube, this could be the time that Montenegro shines at Eurovision and makes the Grand Final – and rightly so. The EBU always asks the Juries to vote for songs that would be seen as modern and contemporary and have a life outside of Eurovision. Well this ticks these boxes and is a song that once we listened to it we could not get out of our minds. Think of Pitbull, Flo Rida and Jessie J coming together. This is how current this song is.

One thing is that rap and hip hop tend not score well at Eurovision or is not translated well on television. So all eyes are on “Who See” and Nina to see how they can reverse this trend. Well their official video is explosive and energetic and captures the style of Who See accurately, but can they reproduce this on the live stage? Well we have gotten a brief glimpse into how “Igranka” will sound live. Last night they performed live  in a night club and we have a brief video clip – and they sounded – “SPOT ON” for us! As you can see from the reaction of the crowd, they were loving the performance and song.

If you don’t know of “Who See” – then shame on you! They have been in existence since the early 2000’s and won the 2012 MTV Award for Best Adria Act.Its members are Dedduh (Dejan Dedovic), from Kotor, and Noyz (Mario Dordevic) from Herceg Novi.  To date they have made 2 albums as a group “Sviranke Kupcu” (2006) and “Krs i Draca” (2012). They have also released several solo projects in between their group albums.

They will be joined at Eurovision by the highly successful Nina Zizic. In 2004, she joined the band Negre, who entered “Evropjesma 2005”, the Serbo-Montenegrin Eurovision Song Contest 2005 entry selection. Though not winning the selection process they went on to success across the Balkans. 2007 saw Nina’s career soar with the release of the song ‘Strogo Povjerljivo (Highly Confidential). The song was an instant hit and topped the charts on Montenegro’s radio and TV and across the Balkans where it was number 1 for several months.

This combination of “Who See” and Nina seems very organic and should translate to the big Eurovision Stage with ease. They will perform in Semi Final 1 on May 14th in position 9. If you like their song then make sure to vote for them on our on-line poll using the below link where they are currently 11th in the ranking for Semi Final 1.

You can vote as many times as you want on the poll and it will be open for the month of April. We certainly hope that Montenegro make it to the Grand Final at Eurovision as they are one of the highly interesting and entertaining acts at this years Eurovision.