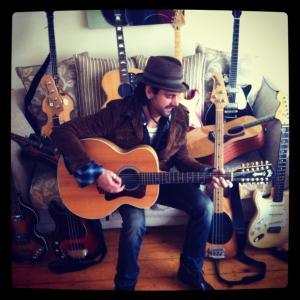 For our international readers, Andrew Mann came second in the Irish Selection for Eurovision in 2012 – missing out to Jedward and their song “Waterline”. It was hoped that Andrew would come back in 2013 and try again as both the Juries and the Public took a strong liking to this highly talented Irish Musician.

Andrew had posted on his official twitter page that he had some exciting news coming up and that RTE would be announcing very shortly. We hare at Eurovision Ireland (EI) went on the offense and went searching for information. Hopes were high here in at EI HQ until we stumbled upon this video clip for The Voice of Ireland” TV Show that begins tonight. Take a look at the clip and at about 25/26 seconds in – that was when we cried with disappointed.

There you see it – Andrew is taking part in The Voice Of Ireland. Knowing his pedigree of talent we are sure he is going to make it to the live shows which would rule him out of appearing on other TV shows – including The Eurosong Final. Heartbreak for us all as we were hoping for another wonderful rock song from Andrew at Eurosong 2013. In case you missed him last year here he is with his amazing song “Here I am”

We all here at Eurovision Ireland wish Andrew the best of luck in The Voice of Ireland and we will keep you up to date with how he progresses in the contest.