Eurovision Ireland On The Town Part 1

Eurovision Ireland – On the Town with Eurovision Artists at Euroclub

Eurovision maybe long days of rehearsals, interviews and press conferences but at night it is a chance to let your hair down – well in my folicly challenged way it is more suited to say that I let my hair down many a year ago and forgot to pick it up again – but I managed to paint the town and that town being Baku

Every evening at Eurovision, all the Press and Delegates want to meet and party with the people who make and write about Eurovision.  And where do they do that? At “Euroclub” of course.  Euroclub is nightclub that the host city takes over for the 2 weeks of the contest  where all of us accredited journalists and artists come to party to Eurovision Music past and present. It is arranged by the official fan supporters group aka OGAE.

This year Baku has a large venue right on the waterfront looking out over the Caspian Sea. Inside we have a very high tech arena that you could almost host a concert in itself. Complete with one of the longest bars I have ever seen that the front of which is a video screen. A restaurant where every table has it’s own waiter – I kid you not – then 2 enormous video screens the length of the venue where they show videos of Baku and the fans. Then there is a stage where the DJ and the Artists perform. And if that was enough we then have 3 film crews there every night from Azeri tv stations,  who interview the artists and fans. It really is an amazing venue for Euroclub.

So who were we talking to? I had been speaking to the Cypriot team earlier in the day and when their fantastic singer Ivi came into the club we were introduced to her. Well Ivi is a party girl and she couldn’t wait for the DJ to play her song and she dragged me up to the floor to dance with the Cypriot delegation. Ivi said “Oh I love it here in Baku and I also love Jedward. I have met them and they have been so much fun. They certainly can put on a fantastic show. I really want people in Cyprus vote for them – and I hope people will vote for Cyprus back in Ireland”. Ivi was certainly the woman who got us all dancing and into the party atmosphere.”

So after Ivi had made me dance to “La La La La Love” several times I needed to rehydrate with some of the local refreshments. So who did I bump into but  the beautiful Belgian Singer Iris. She is only 16 years old but she was an absolute sweetheart. Upon hearing I was from Ireland and knew Jedward she came running over to say how she “loved meeting the guys in Amsterdam” and that she has her pictures of meeting them as her Facebook profile. Iris told us that she was having a wonderful time in Baku and that she was only 16 but at Eurovision it meant that she was able to stay up a little later than usual. A charming young woman. 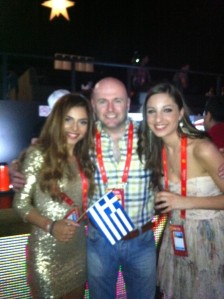 As you can see from the picture I also met the stunning Eleftheria from Greece. Sparkling in her golden dress – she was dazzling. I had always thought that she looked like Cheryl Cole but she was even more pretty than the former WAG. Eleftheria told us that she had never been in a competition before where all the other artists have been so supportive. “It is refreshing to feel all the love from everyone”. Again she said that she loved Jedward last year and even more so this year. Just as we were talking “Opa” (the Greek song from 2010) came on and guess what – yes I was dragged up on the dance floor. You need to be fit for this job. This was then followed by Eleftheria’s own song from the competition. She treated us to her dance routine and Euroclub was overjoyed.

It is no surprise that I have blisters on my feet due to all the dancing but it would be rude to say no to the offers of dances from such beautiful women. So for a first night out on the town we had a blast and even managed to be on television in Azerbaijan.

Who would you  love to meet on the Euroclub Dancefloor?