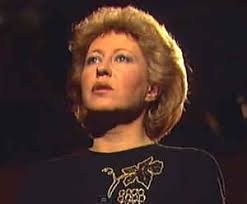 Portuguese singer Maria Guinot has died after a short illness. She was famous in Eurovision circles for performing in the 1984 contest in Luxembourg with the song ‘Silêncio e Tanta Gente‘. It finished 11th with 38 points. Many think it should have done much better.

Maria was born Maria Adelaide Fernandes Guinot Moreno in June 1945. She released her first record in 1968 after appearing on a radio show, and others followed in the 1970s and 1980s. In 1981, she took part in the Festival da Canção with the song ‘Um Adeus, Um Recomeço’. It finished third behind Carlos Paião and José Cid.

Here’s that performance (apologies for the sound quality).

She also dabbled in the more serious side to music. In 1986 she recorded ‘Homenagem às Mães da Praça de Maio‘, which was part of a compilation album about the trials and tribulations of people in South America.

More recently, she collaborated on other compilation albums, and was known as an author, often partnering Pedro Osorio (her conductor in 1984)

Maria suffered several strokes after 2010, which left her unable to play the piano. She died of a respiratory infection on 3 November.

Eurovision Ireland’s thought are with Maria’s family at this time. She will be missed.