God aften Europa og godmorgen Australien! This is Aalborg calling! Tonight we’ll find out who Denmark will be sending to the Eurovision Song Contest in Lisbon!

Sit back and relax, and let Eurovision Ireland’s own James Scanlan entertain and inform you. Fans of #JAMDAN fear not, Dan might pop by later as he’s busy covering Estonia… if he doesn’t get lost in Verona…  😉 As always, feel free to tell me what you think and give your opinions about tonight’s Final and who your favourites are!

Tonight’s show comes to us courtesy of Danish broadcaster DR live from Gigantium in Aalborg, hosted by Annette Heick and Johannes Nymark. The winner will be decided through 2 rounds of voting. In the first round, the top 3 will be chosen to advance to a super-final based on the votes of a five-member jury (50%) and a public vote (50%). In the super-final, the all out winner will be selected by a combined public and jury vote.

You know the drill: Just refresh this page to get the comments and points of view!

You can watch the live show HERE from 20:00 CET or you can try this LINK.

10 acts will perform tonight, but there can only be one winner! Singing tonight we have (in order of appearance):

God aften Europa! James here, getting ready for Dansk Melodi Grand Prix 2018. While you’re waiting, why not have a look at the nature programme showing in DR1? I don’t know what this is, but I want one!! It’s like a cross between a monkey, a kangaroo and a Velociraptor (it has claws!!)

As lovely as it is to learn about sloths, is the Eurovision stuff going to start soon?

Reliving some of the highlights for Denmark from the Eurovision Song Contest – including Dansevise, Fly On The Wings of Love and Only Tearsdrops – all great songs!

Our first look at the stage tonight, including an orchestra – oh, for Eurovision to have a live orchestra again! 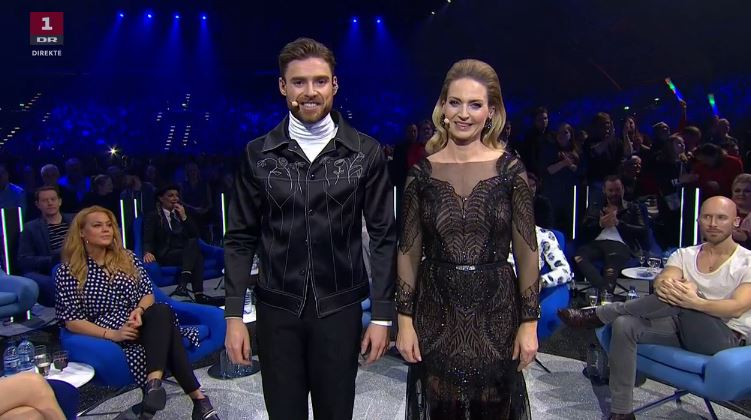 Our hosts for tonight, Annette Heick and Johannes Nymark. Interesting choice of jacket there Johannes… looks like a huge audience there in Aalborg tonight! And they’re really excited, as are we!

Our first song of the night! What can I say about ‘Riot’? It’s trying to have a sing-a-long chorus but doesn’t quite get there for me. It’s providing a good stage show though, with dancers and a whole urban decay theme. It could be an anthem, but needs a bit of work to be an arena shaker. This being said, I like her energy and it’s a great start to the show!

50% of tonight’s votes will come from a jury, and here they are! They all look rather serious for what’s supposed to be a fun night, don’t they? 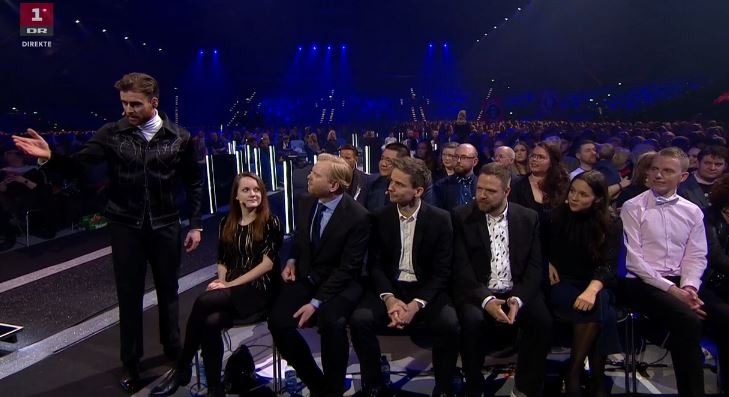 Anna looks like she’s ready for bed, not the Eurovision stage! While I’m usually a fan of understated performances, this has too little going on. She literally blends into the background (not a good idea for most watched show in Europe!) and there’s something very JESC-ky about this entry… it’s all very twee and sweet, and Anna looks adorable… but I think sending this to Lisbon wouldn’t be a good idea….

According to our readers, the song you’ve tipped to win tonight! And judging by the audience’s reaction, its one of their favourites too! It’s like Game of Thrones the musical, strong Viking overtones, both in the look and sound. On paper, a Norse warriror song shouldn’t work, but by Odin it does… and I love it! I think this will sail through to the Super Final with no problem. I won’t jinx anything by making further predictions… but wow… 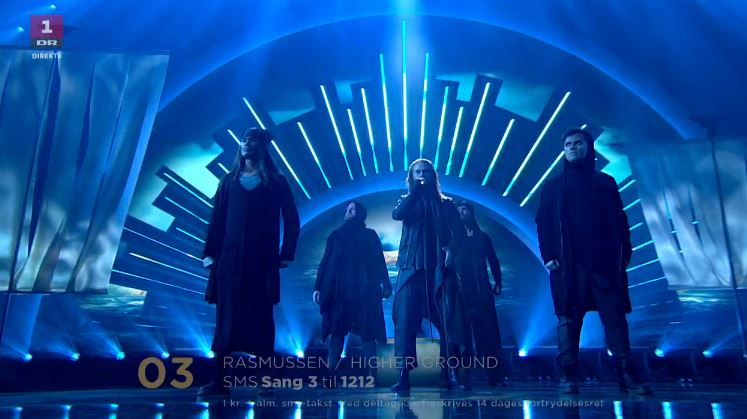 Another fan favourite, Whigfield is back! But she’s all grown up and very Marlene Dietrich in a crisp suit. While I’ve no doubt a bevy of sexy back-up dancers and suggestive and liberal lyrics are going to appeal to a lot of people, musically I find it quite flat and repetitive. If this does go to Lisbon, you might want to keep granny out of the room while she performs!

While we calm ourselves down after that flirty number, we’re taking a little break from the songs as former Danish commentators of the contest share some of their memories. It’s strange to think that some countries have had more than one commentator, especially as growing up in the UK Terry Wogan oversaw almost every Eurovision my family ever watched!

Back to the music!

Sandra – Angel to My Battlefield

With her husky voice and minimal red and black staging, Sandra has instant impact. It’s a shame the song itself is quite tame and plodding. There were quite a few moments I felt that a faster tempo would have suited a song like this more. The crescendo did lift it a little, but for me this was less of a victory on the battlefield and more missing in action… shame, I had high hopes from that beginning… 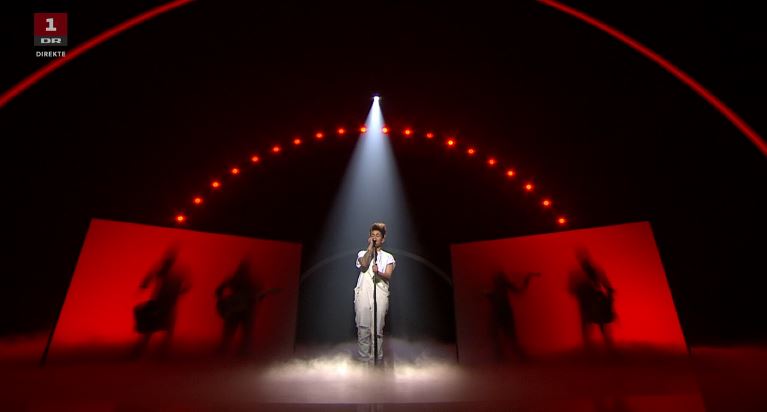 That sketch made a wind machine that plays the music from “In A Moment Like This” look like a lot less fun than I imagine it would be!

Vocally, he’s mumbling which spoils what’s not actually a bad track. It’s a bit of a mish-mash with urban dancers and more bubblegum pop ding-a-ling hook, but it does work. The one thing that’s really putting me off is that Lasse is pulling faces that are trying to convey emotion, but are more in the vein of stomach cramps… yes, singing with conviction is important at Eurovision, but remember what Mans said in 2016… loveable, not desperate 😉

CARLSEN – Standing up For Love

A very colourful performance from this trio, with a nice up-beat ballad about loving and being true to yourself… while I usually convulse inwardly at such songs, I think it’s actually one of the stronger vocal performances we’ve seen tonight! My one critique though has to be that CARLSEN need to work on staging and catching cues a little bit, so it doesn’t look so random. But otherwise, a fine effort!

We’re back with the commentators now, discussing the Fall of the Berlin Wall and the impact this had on the contest – rather a huge one! A lot of the songs that year were about European unity and of course, in the years that followed Eurovision almost doubled in size! They’re also touching on the break up of Yugoslavia and Bosnia’s debut entry “Sva Bol Svijeta” – one of my favourites, but quite heartbreaking too…

She’s certainly channelling Diana Ross with that hair and those notes! Signals is quite a jazzy number, strong overtones of R&B, but doesn’t go anywhere for me… it meanders around the same few lyrics and the stage show is a little sterile. KARUI is having the time of her life though. I think that while something like this suits a small arena, it would get utterly lost in the Altice in Lisbon… 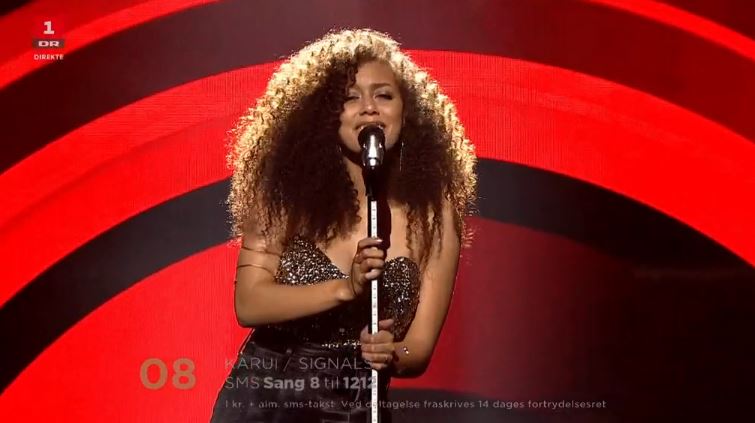 Ooohh, lady in red! That’s quite an attention grabber, especially with the rest of the stage being in black and white! The only song in Danish tonight, this stands out for several reasons. It’s a bit electronic, something in a native language and has a simple but striking gimic for staging… I think this could be one to watch for the Super Final too! And even if it doesn’t, I like it a lot!

Last song of the night up next!

Albin Fredy – Music For The Road

Now this is a surprise… a real twanging country number to round off the evening, and the audience are on their feet! It’s done very simply, but has instant impact and Aalborg is going wild for it… could this be music for the road to Lisbon? 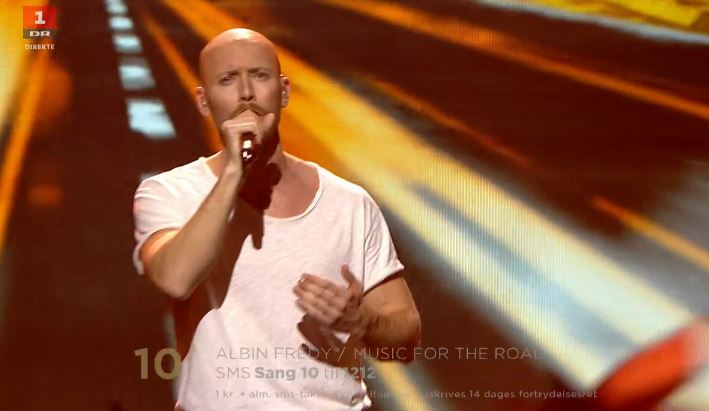 So those are Denmark’s 10 Eurovision hopefuls! We’re having a quick recap of them – have you chosen your favourite yet? 😉

OK, so my predictions for Super Final – Rasmussen, Sannie and either CARLSEN or Albin Fredy. Those are a mix of my personal wish list and what I’ve seen from the audience tonight… but I’ve been warned the Danes like to throw a spanner in the works and surprise us!

The commentators are discussing Ukraine and Russia at Eurovision… yes, they’ve had quite an eventful time in the contest! In Copenhagen of course, there were very audible boos whenever Russia got points that night. I remember Copenhagen 2014 well, it was my last contest before I joined Eurovision Ireland and started going to them in real life! 😀

WOW! What a number! I couldn’t screen grab all of those Eurovision winners they went so fast! Bravo! Brilliant show! How many did you spot? 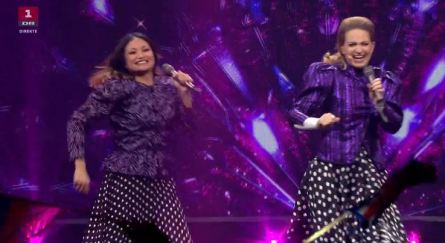 Now Conchita Wurst sings ‘Rise Like A Phoenix’, which won her the Eurovision Song Contest in Denmark 4 years ago… what an eventful 4 years it’s been! 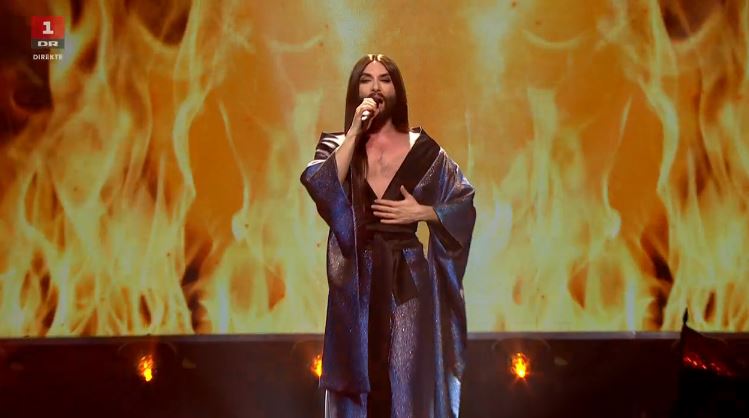 RESULTS TIME! Who is through to the Super Final

Albin Fredy is through to the Super Final!

Rasmussen is through to the Super Final!

Anna Ritsmar is through to the Super Final! 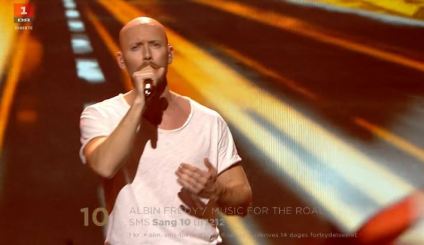 Well, 2 out of 3 isn’t bad… if you’ve been following my live blogs with Bogdan for Romania, you’ll know we’ve been struggling to get one right!

Without sounding too cruel, I’m surprised this made it into the Super Final. My only conclusion is that Denmark think Portugal was on to something with an understated single performer and want to copy it… vocally it’s not bad, but this would struggle in Lisbon… 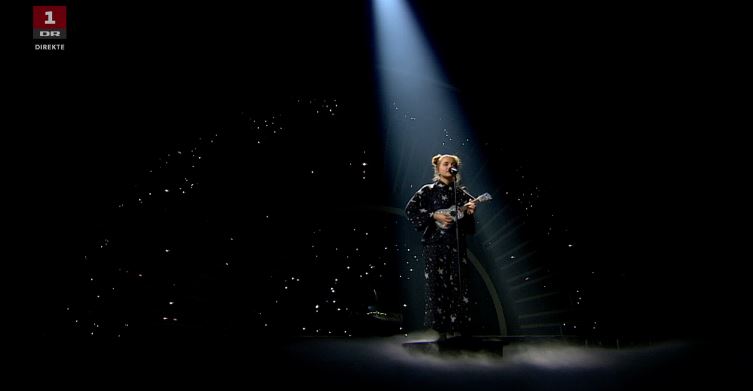 OK, forget being impartial, DENMARK THIS IS WHAT AN OBVIOUS CHOICE LOOKS LIKE!!! This is EPIC and would get votes from every Game of Thrones fan and lovers of all things Viking around Europe! Come on Denmark, you know it makes sense! Just listen to the arena go wild for them!!

He’s a moody loner, but you can save him! I get the whole vibe he’s going for and yes, the song is really catchy, I admit it. But as I’ve said with other entries tonight, staging that suits a smaller arena won’t work for the largest indoor arena in Europe! I’d rate this 2nd if it were up to me

Who do you think will take home the win? My feelings should be VERY CLEAR but of course, it’s not up to me, but the good people of Denmark!

VOTING LINES ARE CLOSED… Denmark, your Eurovision 2018 fate is sealed…

I don’t think I’ve been so nervous about the outcome of a national finale since… oh… last year?!

Anna Ritsmar is 2nd, which means Rasmussen wins!! With 50% of the vote no less!!

WOW! What can I say, that was a brilliant night! Mange takk Danemark! And well done, fantastic song choice, can’t wait to see you in Lisbon!

Thanks for reading along everyone, till next time!

Thank you Europe, and good night!