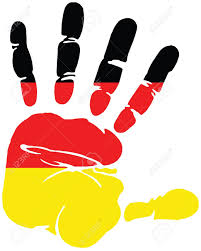 You might be wondering what this title means? Well, on this day back in 1990, the two Germanys finally unified. They therefore made it a national holiday. So to celebrate this, here are a few of those German songs down the years that have made an impression.

First is the last winner to come from the country. Lena Meyer-Landrut had a massive hit all over Europe with ‘Satellite’ in 2010, and proved that even a country from the Big 5 can still win the contest. There’s hope for everyone. Her singing accent may be a little Lily Allen mockney, but you can’t deny that this was a decent enough winner in Oslo. Stefan Raab was the svengali behind the act, and ensured that she became only the third performer to aim to successfully defend her title. In Düsseldorf she came 10th.

Next we go back to 1962, and glorious black & white. If you think migrants moving across Europe is a new phenomenon, then you’d be wrong. Conny Froboess sang about ‘Zwei kleiner Italiener’, a song about two Gästarbeiter who wanted to return to their home in Naples. The song contrasted the Italians’ plight with that of the natives of Germany. It finished sixth out of 16, but still became a moderate hit throughout Europe.

As you may know, Germany holds the record for the most participations, and only missed out in 1996 when this song failed to get out of the preselection for Oslo. Many thought it should have qualified ahead of some of those songs that did get through. I think it would have gone down a storm, but the preselection jurors of Europe who only heard audio versions thought otherwise.

Of course, with 60 participations, a number of acts have taken part more than once. In particular, two acts have sung three times. Results-wise, the best of these is the group Wind. They took part in 1985, 1987 and 1992, finishing runners-up twice, to Bobbysocks and Johnny Logan. The 1985 contest saw a very close finish, and Norway only had a narrow victory. From that contest, here are Rainer, Petra, Sami, Willi, Alexander and Tina with ‘Für alle’. The song starts 1.16 in.

We can’t miss out the 1970s, so this next song was the first song from Germany not to be in German. In 1977, the free-language rule had actually been in place in the 1970s, but by 1977 had been abandoned (until 1999). However, ARD were given a dispensation as the rule changed after this song by Silver Convention had been picked. ‘Telegram’ was a song of its time, but the juries didn’t quite think so. It only finished eighth.

Finally, the only song to finish with is Germany’s finest hour. The legendary Ralph Siegel and Bernd Meinunger have written many songs, but this – to date at least – is their only winner. Nicole from Saarbrücken sang ‘Ein bißchen Frieden’ and it became massive. A 61-point winning margin – huge in the 1980s – and she burnished her credentials by reprising her song in French, English, Italian and Dutch as well as German.

What will Germany bring in 2017? What do you think?