Monday night the story broke that a member of the Russian Eurovision Jury made a live periscope broadcast of her jury voting during the performances of Douwe Bob from The Netherlands and Iveta Mukuchyan from Armenia – READ HERE.

The EBU yesterday late in the evening just under 3 hours before the live broadcast of Semi Final 1, released a statement detailing the action taken by the EBU and RTR the Russian National Broadcaster concerning the incident.

“Following constructive talks between EBU and RTR, Russia’s participating broadcaster, RTR proposed to withdraw the respective jury member who produced the video recording. As a consequence, the EBU declared the voting result of the respective judge invalid. The other four judges submitted a valid jury vote. RTR will have the opportunity to provide a replacement judge for the Grand Final on Saturday 14 May. “

What the EBU says is

“The EBU does not consider it a breach of the rules to stream a video online from the jury deliberation, as long as individual rankings, combined rankings or jury points are kept confidential until after the Grand Final.”

Let’s take that statement for one moment and look at it in context to what actually happened last night. Going forward any jury can do a live stream of them voting as long as their results are kept secret. 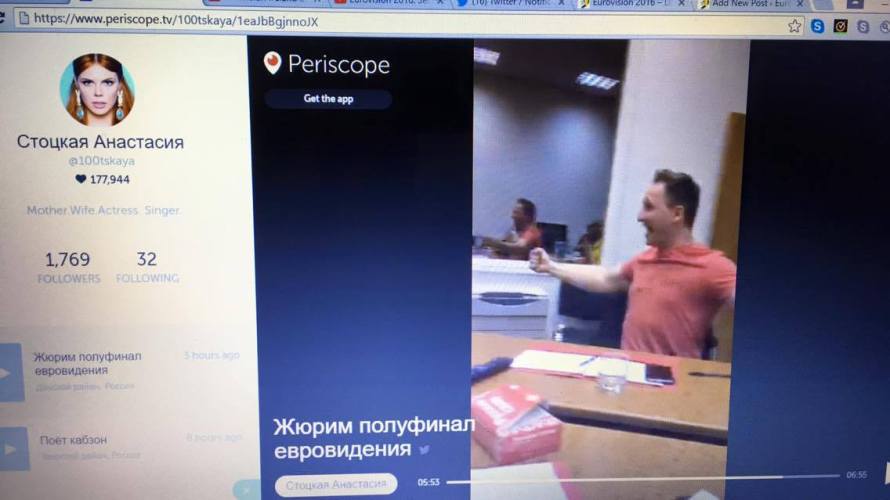 These are fundamental questions that are all there for people to see in the video of the incident yet the EBU has not addressed any of these in their findings. We believe that the Notary is selected by the national broadcaster in each country. For such a pivotal role should that not be done via the EBU following this incident.

What last night’s incident showed us is that the controls in place by the EBU are neither robust or precise to the point where secrecy is to be clearly known and adhered to by the jury members and the actions that the notary and head of the jury are to take when governing the voting process.

One cannot say with 100% certainty that such voting environments (that we have detailed above) are not taking place in countless other juries across Europe, as the EBU by having to consult with PWC in essence shows that they could not swiftly take action against the jury members involved for clearly breaking any code of conduct or duty of care.

However I am somewhat confused by the article on Eurovision.tv as they conclude by saying

“The broadcast of the Jury Semi-Finals and Jury Final is an internal transmission, not meant for public distribution,” said Jon Ola Sand, Executive Supervisor of the Eurovision Song Contest on behalf of the EBU.”

“The EBU does not consider it a breach of the rules to stream a video online from the jury deliberation, as long as individual rankings, combined rankings or jury points are kept confidential until after the Grand Final.”

So one has to ask the EBU – which is it then?

One sentence the statement says “Jury Semi-Finals and Jury Final is an internal transmission, not meant for public distribution,” yet then in the following paragraph contradicts itself by stating “The EBU does not consider it a breach of the rules to stream a video online from the jury deliberation.” One has to ask the EBU to say which one is it then?

This is not the first time that Jury scandals have rocked the credibility of the Brand of the Eurovision song contest – last year Jury votes were disqualified and then there were the allegations of vote-buying that resulted in the EBU opening their anonymous data base for individuals to provide evidence of irregularities. However 3 years on and we are still have issues with the voting procedure.

To summarise – The EBU’s statement on last night’s events has created even further confusion from their own findings, secondly it did not address the lack of potential influence jury members comments have on others on the voting panel, how jury members were not fully paying attention to at least 2 songs from what we witnessed and how the EBU would seem to have little if no control over jury voting environments as if it had not been for the community websites picking up on this story then it would not have been made public and could even be replicated in other juries without the EBU being able to independently able to verify to the contrary.

The outcome of the EBU investigation – it has created even further confusion in their findings and statements, has seen the actions of one Jury member condemn the work done by the other Russian jury members, it has certainly created a considerable amount of negative on-line social media reaction towards Sergey Lazarev which is totally unjust! How can a performer be responsible for the actions of a jury member thousands of miles away from him. I know I certainly feel empathy towards the Russian Delegation in Stockholm who have staged an unbelievable performance for Europe. Remember people that the motto for the contest is #ComeTogether.

However the fundamental outcome of this investigation is to show that the voting procedure is still not in a place where 100% accuracy can be guaranteed based on the observations that we outlined from last night’s jury voting environment. One would have thought this situation would not have arisen. Yesterday started with excitement with Justin Timberlake being announced as a guest performer at the grand final only to be completely overshadowed – and trending higher on social media – about the Russian jury controversy.

One is left even more confused on the EBU’s voting policies and procedures than ever due to their own statement and failure to address the fundamental errors in the psychology of Jury voting.

What do you think? Has the EBU adequately investigated the events of last night? Have they missed the glaring issues that we all saw? Is there confidence in the voting system now across Europe in general? Is the Russian experience that we witnessed being replicated across Europe that neither we or the EBU know about? Will Sergey Lazarev suffer because of this event – I hope not!