Those with sharp eyes towards the end of last evening’s first semi-final may have noted Iveta Mukuchyan from Armenia waving an unfamiliar flag. The Armenian flag with a white chevron on it was in fact the banner of the disputed Nagorno-Karabakh region – and its brief flash on a the screen during the first run of reprises has caused a bit of a stir. 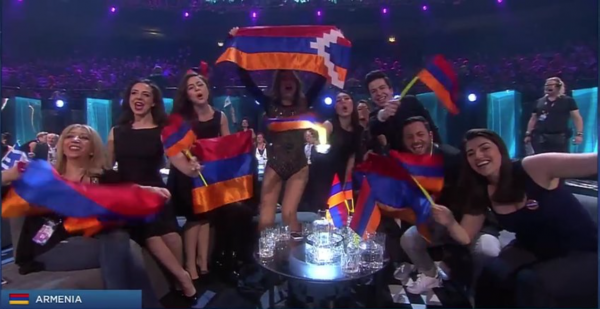 At the winners press conference that was held immediately after the show, an irate Azeri journalist asked heated questions of Iveta and the Armenian delegation, and this morning it has been reported that the EBU is meeting representatives of the nation’s broadcaster over the incident.

When quizzed on her use of the flag at the press conference, Iveta commented that she: “just wants peace on the borders”. But the act of waving the flag of a region at the heart of the recent violent conflict could only have been seen as a provocative act to Azeri eyes – especially as the flag was on the much-discussed list of banned items that circulated during the first week of the event.

This, by turn, is bound to have implications of the further use of flags, both by audience members and delegations alike, and may see more strict rules regarding what can be taken into the arena in future years. It will be interesting to see quite what the EBU’s stance on this matter will be in the coming days.