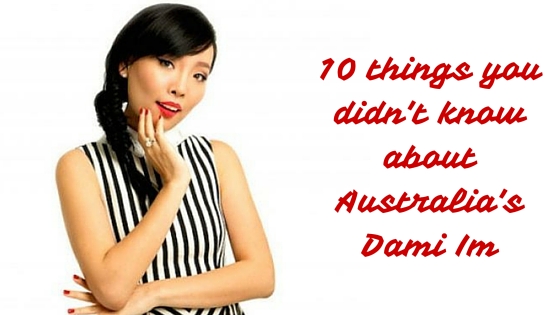 We’ve finally gotten the word from ‘down under’ and it’s official; Dami Im will enter the Eurovision arena to represent Australia at Stockholm. Congratulations, Dami!

So who is this beautiful lady with the big voice? She’s hotly tipped to give the other Eurovision favourites a run for their money so we tracked down some fact on Dami to see what she’s made of.

Who is she? Dami Im is Korean/Australian and is from Daisy Hill, Queensland.

Child star: Dami’s singing career started early. At the age of nine she began her career as a gospel singer in Korea. After emigrating to Australia with her family, Dami released her solo album Dream on an independent label in 2010.

X-Factor: In 2014, Dami’s career received a serious boost when she won the X-Factor Australia and a recording contract with the Australian arm of Sony Music.

Alive: Dami’s winning X-Factor song shot straight to number one in the Australian charts as soon as it was released. Her self-titled studio album also hit number one, making her the first X-factor Australia contestant to achieve such a feat. Dami’s career was going into orbit!

Music in her blood: Dami’s mother, Hae Yun Lee, is a trained opera singer. It seems that Dami has inherited her mum’s powerful pipes.

Self-taught: As a child, Dami actually taught herself how to sing by recording herself singing and playing it back. This is one single-minded, determined lady!

Piano: Not only does Dami sing, she plays piano, violin and composes her own songs.

Accomplished musician: Dami has released four albums, has toured extensively and has a shelf load of awards including Cosmo’s ‘Fun, fearless female of the year’ 2014. We think Dami has a great chance of adding a Eurovision win to her collection of awards. Let’s wait and see.