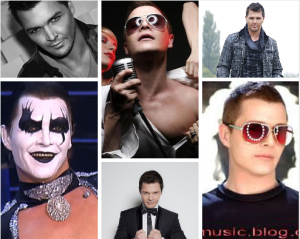 That was the resounding message that Serbian hopeful Aleksa Jelić sends to all his fans across Europe when we here at Eurovision Ireland caught up with him to ask about his preparations for the Serbian national selection and his thoughts on the prospect of competing at the Eurovision Song Contest in Vienna this May.

Given that Serbia is one of only two countries in the entire history of Eurovision to win on their début and that they have also scored in the Top 10 twice in under ten tries, you might think Aleksa would be little nervous at the thought of singing for Serbia. But instead, when asked if he was daunted by the thought of following in the footsteps of household Eurovision names like Marija Šerifović and Željko Joksimović, he quipped “Absolutely not.” – Good for you, Aleksa! His confidence is understandable. His father was guitarist and singer for the hugely popular Yugoslav rock band YU Grupa and Aleksa remembers “I was surrounded by musicians from when I was a baby.”

Talking about his Eurovision entry, Aleksa promises us something that will be “very hard to forget,”. He also hinted that despite Serbia being one of only a handful of countries that has always sung in its national language, this may well change if he is chosen to go to Vienna. He explained that while he personally would choose not to sing in Serbian, the decision isn’t down to him and added “but I also don’t mind if the song was in my mother tongue.” When asked, Aleksa said representing Serbia at Eurovision would mean great “personal satisfaction,” for him, stating as well that if he wins a second victory for Serbia in Vienna, he’ll immediately let us know how it feels!

Carrying on with music, Aleksa says he wished he had written Robbie William’s hit “Let Me Entertain You,” – excellent choice, we must say! On previous Eurovision entries, he says he was a bit too young to follow the contest when Serbian artists competed as part of Yugoslavia, but did reveal to us that his favourite Eurovision winner was our reason for heading to Austria in May – the incomparable Conchita Wurst and Rise Like A Phoenix!

What inspired you to start singing? Who were your biggest musical influences when you were growing up?

We all know performing live doesn’t always go according to plan. What’s the most embarrassing thing that has ever happened to you live on stage?

God forbid, fortunately I never experienced an embarrassing moment on the stage…Please keep your fingers crossed for me that I dont 😉

If you weren’t a singer, what do you think you would have liked to do instead?

Oh that is a tough question as I always loved music and knew it was for me. However I would love to be a Traveler/Explorer discovering different beauties of our Planet..

Serbia has sent a range of musical styles to Eurovision, from ethno-ballads to turbo-folk. What can we expect from your Eurovision entry?

What would being chosen to represent Serbia at Eurovision in Vienna mean to you?

It would be more that just personal satisfaction. It would be an honour and a dream!

How do you think it would make you feel if you won the Eurovision Song Contest?

If I win I will immediately let you know 😉

Do you have a message for your fans in Ireland and across Europe?

Yes, I LOVE THEM ALL !!!!! Thank you for showing such an interest in both me and my country. I so appreciate it.

Hvala lepa Aleksa! Best of luck with your preparations for the Serbian national selection! Maybe see you in Vienna?