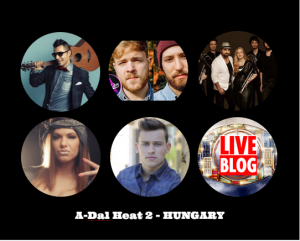 10 acts will compete for a place in the Semi Finals. You can watch the show live here at 20:25 CET and just refresh our page here to get the views, comments and strangely unique points of view from Mr Phil Colclough of On Europe who you will know from us here at Eurovision Ireland.

Now last week Phil only got 2 – YES TWO – out of the 6 qualifying acts correct. We decided to give him the BENEFIT of the doubt and let him try to redeem himself tonight. Will this decision come back to bite us or will he be vindicated tonight – YEAH RIGHT!

So since we are giving him a second chance at ACCURATE punditry we set him the task of trying to compare the acts with chocolate as his cheese references didn’t work well last night. So be warned!

I wish to say in my defence that the cheese references were really good but, as our webmaster dictates, we’re going with Chocolate descriptions.  So, how to describe this set of 10? – Well it’s a bit like a 70% cocoa mix.  Lots of dark and heavy notes with a hint of “oh my god”, smooth to the palate, but fiendishly difficult to stomach more than one.  I’ll be back at 2025 CET for more Choco-puns… I know you’ll miss me till then.

And so it came to pass that we are live for this….  the stream has just kicked in and we’re off…. shortly….

Currently they are introducing the jury…… my favourite people, clearly!

Song 1 – Chances – The Night.  Another off key offering in the Quarter final, which clearly means that it’s going to score shedloads in the jury.  Two beardy men with guitars really doesn’t do it for me, it doesn’t go anywhere and it is plodding to an inevitable conclusion.  It doesn’t do a great lot and loses it’s way with a lack of lyrics.  Bad start, but there are worse in this semi.  In Chocolate terms, It’s a cheap man’s Creme Egg… looks ok, but tastes vile. 31 points shouldn’t be enough to trouble the qualifying.

Song 2 – Ádám Szabó – Give Me Your Love.  A Song of the old school, well constructed and unlike so many of them in recent times, believable.  He’s putting his heart and soul into this performance, like a lovingly crafted Kinder Egg, looks rough on the outside, but delve deeper and it’s got a creamy inner texture.  He looked really well down the camera and connected with me.  He should to that with the Jury as well.  46 points, Sailing through to the Semi. Final.

Song 3 – Leander Rising – Lőjetek Fel.  From the sublime to the psuedo-Lordi.  Just because they are in suits doesn’t mean that they are any different.  A Proper, as Roy D Hacksaw would say, Rock band that are good in their genre I am sure, but in this contest, possibly offending the sensibilities too much to do well.  Choco wise?, A bit like a supermarket own brand…. you’d only lick it if you had no choice!! 36 points from the jury… on the cusp.

Song 4 – Ív – Fire. The musical equivalent of a Bournville bar, Dark, sulty and performed like something Italian from years ago.  It doesn’t have much musically but when you are smouldering all over the screen, you don’t need to I guess.  Not a bad song at all but stragely I didn’t have it to qualify.  Just goes to show what a visual performance can give a song I guess. 38 Points, Should be through.

Song 5 –  Gyula Éliás Jr. feat. Fourtissimo – Run To You.  Not quite sure what accent that he is trying to sing in, but I think that its faux Arkansas, a bit like the song really, it’s trying to be a smokey old American country song with an edge,  but also with schlagery overtones.  It trying to be everything to everyone, but I don’t know what it’s actually doing.  It’s certainly not bad and gets the audience clapping along, which can’t be a bad thing. 36 Points, the App users rescued that.  again, on the cusp.

Song 6 – Pankastic! – Kicsi A Világ, De Nagy Világ!.  I don’t know what to make of this song.  It’s Hungarian with a whiff of Greece, the 1930’s and some other aroma’s ( Terry’s Chocolate Orange, possibly).  It’s a melange of styles all Sellotaped together and packaged together, but it misses my spot to be honest.  They need an infeasible 46 points to qualify. 38 Scored… They may well get through with that, but ADAM is through!

Song 7 -Heni Dér – Ébresztő.  A well sung ballad type stomper! – All of which adds up to  a really decent song ( sorry, i stepped away from the keyboard for most of it!!) – but I had this to qualify so I liked it at some point surely.  She looks like Shirley Clamp…. which may or may not be a good thing.  39 points will qualify this as of right.  Only scores 34 though – still in with a chance, but its a slim one.

Song 8 – New Level Empire – Homelights.  A Midtempo song really, that has a something that connects with me – moves along quite nicely and has a melodic stomper beat that gets you stomping your tiny feet in a way that many songs never used to.  yeah, not bad at all… Chocolaty? – well maybe more a Cadbury’s Caramac than Munchies, but perfectly palatable.   Still needs a very high 39 points to qualify. Scored 34 though.  I think there is going to be some jury shenanigans later on too but that score qualifies Panktastic and Iv and Heni Dér.

Song 9 – Gergö Oláh – A Tükör Előtt  A slow ballad from yer man, an impassioned performance if ever there was one, reaching out for the juries, but has me reaching for the toblerone which has more points than I would give him, but I’m not a mentalist on the jury! – Again, crowd like it, but turns me off.  Sadly, only needs 37 to qualify. and gets…. 41?!?! – How did that happen?? – Clearly I know nothing!!

Song 10 – Saci Szécsi & Böbe Szécsi – Our Time.  The girls need 37 points. The song itself is ok, but I think they are a bit nervous when singing this and I fear that 37 points is too strong for this song.  Remember the Twins that sung “My Time” in the UK National final of 2009, this reminds me of that, only significantly worse.  Oh dear, this could be heading for the bottom.  – no, 34 points.

So, after all that, I’m still sitting at 2/6 with the Televote to come… I’ll be back when the results of that are in…

PHIL’S PREDICTIONS (For what they’re worth)

Completed before the Semi Final as you know, they’ll be giving the votes live after each song – No guffawing at the back!