With 5 wins to their name already and following in the footsteps of titans such as ABBA (enough said!) and Loreen, representing Sweden at the Eurovision Song Contest is both an honour and a daunting prospect. Little wonder then that the Swedish selection marathon Melodifestivalen is almost as big as our beloved contest itself – alongside a considerable audience across the continent, just under half of the ENTIRE population of Sweden tuned in to watch the final in 2012!

Although Melodifestivalen doesn’t kick off till February, SVT have already announced the 28 acts that will compete in one of four heats, out of which only 12 will progress to the final and be in with the chance to fly the Swedish flag in Vienna next May. We know you’re dying to find out who’s going to take part, but in true Melodifestivalen style, for now we’ll just look at those taking part in Heat #1 and Heat #2 – don’t worry, the others will follow soon! Let’s meet our Melodifestivalen contestants 2015!

Jessica is no stranger to Melodifestivalen, having participated in 2003, 2004, 2006, 2007 and 2010. She succeeded on her first attempt, singing Give Me Your Love as part of the duo Fame, which earned Sweden a 5th place finish in Riga. Will this experience as a contest veteran give her an edge at this year’s Melodifestivalen?

While Behrang’s Jalla Dansa Sawa didn’t make it to the final of Melodifestivalen in 2013, it still proved to be a massive hit in Sweden. He’s reportedly promised that this year’s entry will be different, but something that is “strong and emotionally driven” too – sounds great! His collaboration partner Victor Crone took part in the 2009 series of Idol.

This colourful trio is made up of the adorable Dolly, Holly and Polly, who say they are from a dollhouse in Dollyville (I’m guessing it’s somewhere near Dollywood) and that their song is about getting people to socialise and be happy – aww… bless ‘em! 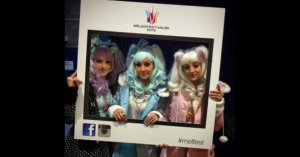 At the age of just 15, Molly came 4th on Idol in 2011 and was also once romantically involved with Sweden’s 2013 Eurovision entrant Robin Stjernberg. This year’s entry into Melodifestivalen also marks her debut single which she part-penned herself – impressive when you consider she’s only 18!

RICKARD SÖDERBERG & ELIZE RYD – ONE BY ONE

Opera singer Rickard is a well-known by Swedish theatre goers, having appeared in many musicals and operas, while soprano Elize is the female vocalist for Danish/Swedish metal rock band Amaranthe. Elize also helped to write this entry, which has been described as a “dramatic power ballad.” Combining an opera singer and a soprano certainly promises to be dramatic! Here is Richard getting festive!

Vocalist for progressive metal band Pain of Salvation, Daniel’s style of music might seem a little out of place at a contest that is usually a big long love letter to Schlager. But considering he is a Melodifestivalen veteran (2010), a multi-instrumentalist and likely to perform a genre that will stand out at the contest, he might prove to be a dark horse…

This guy barely needs any introduction! After coming 3rd with Popular in Dusseldorf in 2011, Eric also hosted the Green Room during the 2013 contest in Malmö (where he made THAT comment about host Petra Mede). Is he still as popular as he sang? Swedish bookies certainly seem to think so – they’ve already tipped him as hot favourite to win.

So the bookmakers already have Eric Saade down as the favourite to win Melodifestivalen. Do you think they are right before we have even heard any of the songs in this year’s contest? Is it time for Melodifestivalen to select a new name for Eurovision or will one of the old guard make it to Vienna?