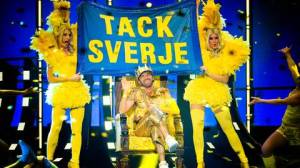 Sean Banan back for Melodifestivalen 2015? Oh yes please! The twice Melodifestivalen singer is looking to make it a hat trick of entries and possibly see him become the male Sanna Nielsen if 2015 isn’t his year.

According to Swedish news reports Banan has recorded and submitted an entry for Melodifestivalen 2015 in Sweden.

Banan took part in Melodifestivalen 2012 with “Sean den förste Banan” that passed the Semi-final stage, but was eliminated in the “Second Chance” round without reaching the finals. But despite this, the song proved very popular reaching number 3 on Sverigetopplistan, the official Swedish Singles Chart.

In Melodifestivalen 2013 he took part with “Copacabanana”. After performing in the semi-final in Scandinavium, Gothenburg, he came 1st and qualified directly to the final, where he finished in 6th place.

Banan’s manager Tomas Lingman is remaining secretive about the Melodifestivalen plans but would not deny the rumours. The SVT Jury have already selected their 14 songs from Melodifestivalen and now Executive Producer Christer Bjorkman is selecting a further 13 acts to compete along with Svensktoppen nasta winner Kalle Johansson.