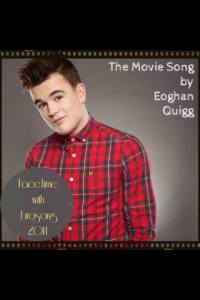 Ireland – We conclude our series of video interviews with the artists in the Irish Eurovision National Final – Eurosong 2014. We like to call this “Facetime with Eurosong 2014″.  We had the pleasure of meeting Eoghan Quigg who will perform the “The Movie Song” on February 28th in the Eurosong Final on RTE1′s “Late Late Show” special. It will be at 21:35 (GMT) and our International Friends can watch on-line HERE

Many people will remember Eoghan from the X-Factor in the UK in 2008 where he made the Grand Final of the contest. It was following his time on the show that he met Mark Murphy – Eurosong Mentor – and hence how Eoghan is now at the Eurosong Final.

“The Movie Song” is composed by the well-known Irish songwriter Karl Broderick, whom is no stranger to Eurovision as he composed Ireland’s entry to the contest in 2005 – “Love”. We were happy to hear that Eoghan is a fan of the word “Groovy” too, as we still like to use it still
In the video Eoghan tells us of his plans for his performance of “The Movie Song” at the Eurosong Final on February 28th. If you think you are Eoghan’s biggest fan then think twice – he tells us who that Honour goes to in the video.

We will make sure to post Eoghan’s official video for “The Movie Song” when it is released shortly.

Thanks to ”House” on 26/27 Leeson Street, Dublin 2. Visit them at their website HERE

As always a huge thanks for the Video Production by Mr Karl Hayden (khayden@iol.ie) with whose help this video would not have been possible.