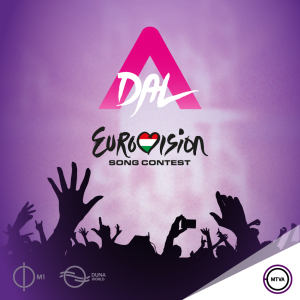 Tonight Hungary starts its selection to choose a song for Copenhagen in May. This first edition of A Dál 2014 will feature 10 songs. Six of them will progress to the semi-final round on 15 and 16 February. Of these six, three will be chosen by the televoters of Hungary and three by a jury made up of Jenő Csiszár (TV and radio host), Magdi Rúzsa (Hungarian representative in 2007), Philip Rákay (MTV programme director) and Kati Kovács (singer and actress).

You can watch the show live with our blog at 20:20 CET HERE

Welcome to our coverage of A Dál.

After some chat from our two presenters, we’re shown the 10 acts taking part tonight.

Our jury will be awarding each song 1-10 points on an iPad. Thankfully Kati Wolf isn’t there to mess things up this year.

“Retikül” by Group n Swing is first on. It’s got a 1940s vibe about it, with our lead singers backing in sharp suits and playing instruments. It’s catchy and gets a big cheer. They get 34 points (out of a possible 40) from the jury.

Laura Cserpes is second on with her midtempo song “Úgy szállj”. She’s in a short white lace dress and has five backing singers. The stage has an electric blue feel to it. There is a lot of warbling to it and she hits most of the big high notes. She’s easy on the eye too. Laura scores 28 points.

Song number three is “Break Up” by Lil C. He too has the full compliment of six on stage. Two male dancers and three backing singers. It moves between balladic elements before getting more RnB in places. He scores 30 points.

Four songs through and we cut to the Green Room and chat to Group n swing. 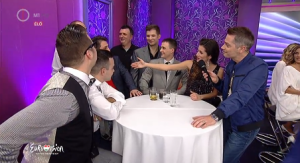 More music now, with song number five: “Help me” by Extensive. It’s in English and is a little like Andorran group Anonymous in style. The backdrop is comic book characters. They score 30 points. 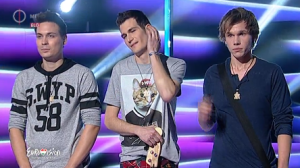 Next on is Leslie Szabó with his song “Hogy segíthetnék?”. He’s setaed on a stool playing a guitar. He’s alone, and is backed by large black & white photos, some with a detail picked out in red. It’s quite effective and contrasts well with some of the previous songs. Leslie scores 35 points, and takes the lead.

Female soloist Hien is on next with the English language song “The way I do”. In a nod to the contemporary, her backdrop is scenes of London (Red double decker, Carnaby Street, fish n chips – that sort of thing). Hien and her band give this a funky edge. If this gets further, it’s in with a chance. Hien gets 32 points. 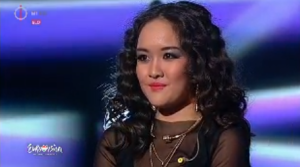 We now quickly go to the Green Room again, and chat to Laura and Lil C.

Song eight comes from five-piece band Depresszió and their song “Csak a zene” (Only music). It’s heavy rock – maybe like something Finnish and our lead singer has a gravelly voice. It may have a particular appeal among some elements but may be a bit too progressive for Eurovision. It scores 33 points.

The penultimate song tonight came from Marge, singing “Morning light”. She has long blonde hair (not blue hair in a high beehive). She sings in English, and is wearing a white top and dark trousers. It has a familiar ring to it (but I’m not sure why). Her ‘futuristic’ backdrop is a multi-faceted crystal bouncing around. She’s alone on stage and this song does hang together well. The jury gives Marge 36 points, and takes the lead. 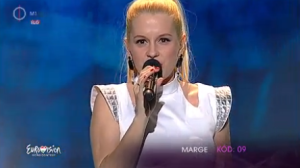 Finally, Viktor Király takes to the stage singing “Running out of time”. He’s tried before with siblings but this time he’s alone. The immediate look is 1950s. He’s in a sharp suit, carries a bug guitar, and has a selection of backing singers in various shades of purple red and green. It’s immediately upbeat. His score is 40, so he wins a jury place in the semi-finals.

So here are all the jury scores: 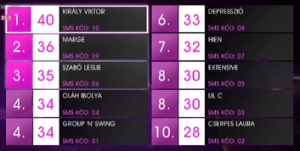 With the jury pics out of the way, the viewing public now have their chance to vote for their three picks from the remaining seven songs.

While the good people of Hungary are casting their votes, we go back to the Green Room, so the remaining singers can tell people why they should vote for them. 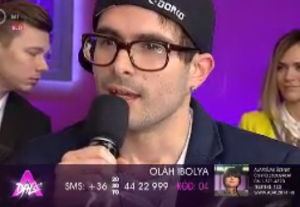 Before we get the results, we get more music from Zoltán Bereczki and judge Kati Kovacs. Zoltán is currently a judge on the Hungarian talent show Megasztar.

With one final final trip to the Green Room and the jury, we’re almost ready for the results. Three songs more proceed to the semi-final, and four will go home.

First through is Oláh Ibolya. Next through is Group’n’Swing. The third and final public choice is Depresszió. So the six are… 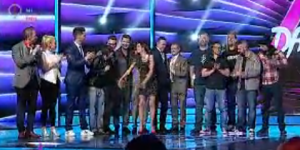 The second heat of A Dál takes place on Saturday 1 February, when six more lucky acts will proceed through. I hope you liked the winners tonight. That’s all for now. Goodnight.