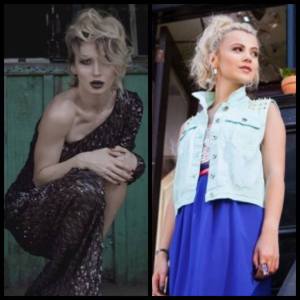 Ukraine have been a powerhouse at Eurovision since their début in the contest in 2003. You can always expect them to put on a show stopping 3 minutes at the contest. Two of their successful female singers have released new material.

Svetlana Loboda or now known as “LOBODA”, has always been an interesting artist both musically and visually – as we had reported before. Never afraid to push the boundaries, she now has on offer the song/video “Under The Ice (Remake)”. This is a thumping dance track that easily puts the rather dull offerings at the moment from Katy Perry, Lady Gaga, Britney Spears and Katie B to shame!

Rule number one of a good pop song is to grab the your audience’s attention in the first 20 seconds of the song/video and then just don’t let go. That is exactly what “LOBODA” has done. A song that could have been from “The Monsters Ball” – the video is so good that they have made 2 versions of it along with 2 remixes of the song.

Both videos see voodoo magic, cock-fighting, basketball playing Mummies and extravagant costumes. The song plays homage to Lady Gaga and Madonna – with a burning crucifix or two, making an appearance. This is gutsy music from a gutsy woman who makes no apologies for what she says or does.

However LOBODA has been the victim of on-line vandalism, as she posted on her Facebook page the following message (in capitals to emphasize her dismay – no make that anger)

Yes the original video was the victim of on-line hackers but that does not seem to have dampened the success of the song that is already #2 in the Ukraine Airplay Charts – second only to Ani Lorak’s “Orange Sky”. There is no doubt that “Under the Ice (remake)” will be a #1 shortly.

Ukraine’s Eurovision “Angel” from 2011 – Mika Newton – has based herself in the USA to follow her musical career. We reviewed her earlier song in the year  “Magnets” . Her sound was very Taylor Swift and we liked it. Her new song “Come  Out and Play” sees Mika going down a more Katy Perry style of song and we like it a lot.

Mika has a powerful voice and this more anthemic style of song has a rousing chorus that is easily sung as it is remembered. She has serious power in her voice that transcends into songs that make you want to fist pump the air. Other sites may have said that the song is simple and repetitive – but we see that as the strength of the song. If you have a killer hook in your song – THEN USE IT! A great blend of acoustic and electric guitars with a constant drum beat that has a slight RnB swing to it. What is not to like about this song!

Mika is determined to break the American market and “Come Out And Play” is definitely the style of song that she should continue to focus on. This is a radio and club friendly song that Mika unleashes with her huge voice. She can certainly far out-sing Katy Perry any day of the week. I have hit the replay button on this song several times. It is easy to see that her record label is confident in Mika, as the video is shot on a large film lot and that does not come cheap!

Mika looks so much more confident and comfortable in front of the camera and has developed her performance skills. Her English pronunciation keeps getting better with each song. We have one thing left to say – “Come Out And Play” – Yes we will Mika!