The Strangest of Bedfellows – Eurovision’s Jedward and Ed Sheeran! 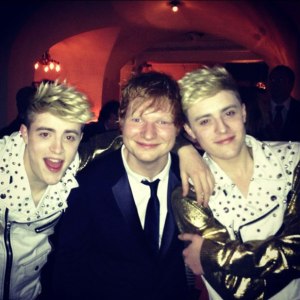 Ireland’s Eurovision Twins “Jedward”, seem to be BFF’s with none other than Brit Award Winner, Grammy Nominated and Multi-Selling singer/song writer Ed Sheeran. Never in a million years did I see that one coming, but Ed was gushing for his love of the Irish Duo.

Don’t get me wrong – you guys know that we have and will always love our Jedward – but we never thought that Ed Sheeran would be a fan of the boys. He spoke of how they met Jedward while he was at the recent Canadian Music awards the MMVA’s

He does the most convincing “Jedward” impersonation that you will not believe. Ed was even given a leather studded jacket for his birthday from the guys – this is so random!

Could one expect Ed to write a song for the boys? That is not beyond the realm of possibility as Ed has written songs for “One Direction” – “Moments”, “Little Things” and “Over Again”. Nothing is impossible when you are talking of Jedward – The guys are still “Jepic” to us here at Eurovision Ireland. Ed Sheeran – would you believe it!