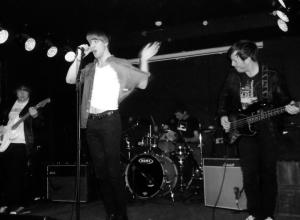 Our regular Eurovision 2014 “Thursday Talent Search” where we focus on who could represent Ireland at Eurovision 2014. We will feature each Thursday some familiar names and some that are up and coming – but all will have something to offer Eurosong 2014 in Ireland. In this Irish article we will look at Carly Smithson, Nikki Kavanagh and the band Common Wolf.

Carly came to our attention in 2007 when she appeared on American Idol. She progressed to the live shows and finished 6th in the contest. Carly was born in Dublin in 1983 and moved to America in 1999. Following her time on American Idol she then joined forces with Evanescence co-founder Ben Moody and they formed the rock band “We Are The Fallen”. Their album “Tear The World Down” made #33 in the American Album charts. Their most noted song was the rock ballad “Bury Me Alive”. Carly has a powerful and distinctive voice with a striking image. With the right rock/pop song Carly could be a strong choice for Ireland.

Now what is interesting is that I suggested Carly to RTE for 2011 and even spoke with her US management, who said that they would not be opposed to the idea of Eurovision and were very familiar with the contest itself. Many will say that rock is not a massively successful music genre at Eurovision – but when done right it can be successful like Finland 2006 and Georgia in 2011. Carly knows how to perform on a big stage and more importantly knows how to perform to a live television audience. Here she is performing live on American Idol with the Beatles classic “Come Together”. Voice, Presence and Looks – this is an easy choice for Eurovision 2014 consideration.

Nikki Kavanagh is a firm favorite with many of  the Irish Eurovision fans and came so close to representing Ireland at Eurovision in 2011 with the song “Falling”, where she was beaten by Jedward by just 2 points. However that has not deterred Nikki from taking part at Eurosong. This year she provided backing vocals for Zoe Alexis in the Irish National final with the song “Fire”. Nikki put off entering herself this year as she became the proud mother of beautiful twins. However she has expressed a strong interest to come back next year.

Nikki is an extremely versatile singer who sings with passion whether if it is a ballad, a pop or a rock song. She knows how to bring the glamour to the stage and knows how to use the screen. She is well used to Eurovision as she was a backing singer for Niamh Kavanagh (no relation) in Oslo in 2010, when Ireland qualified for the Grand Final with the song “It’s for you”. So you know you are in safe hands when Nikki is on stage. We especially love when Nikki sings pop – and an amazing example of this was when she has collaborated with Greek song writer and producer “Gorgi”. In 2008 they narrowly missed out on making the Irish National Final with the sensational pop/dance song “Destiny”. With another song like this with a 2014 vibe, would certainly give the Irish Eurovision selection a strong modern pop song from an amazing singer.

“Common Wolf?” I hear you ask. Well this is where we tell you of a great up and coming Irish act. Common Wolf are an Irish band made up of 4 very cool guys. They have been together for over 2 years now and have developed a very distinctive sound through constant gigging around Ireland. They are made up of Ross O’Farrell (lead vocals and guitar), Cathal Dundon (drums), Glen Malone (bass guitar) and Shane Byrne (lead guitar).

They have been just completed recording their first EP and earlier this year they headlined the “Ceol Train Sessions” in Dublin. These guys write and produce their own music and if you ever get the chance to see them live – then I urge you to do so. They know how to perform live and entertain an audience. They are 4 guys that I feel are on the brink of making the big time. Critics agree with me on this one and I know that if they were to get a chance at the Irish National Final they would certainly give it 100% and offer the public a real choice of music.

As they are an up and coming band we thought we should show you a second video from the guys – so here is their acoustic version of  “Take It All”. I would urge RTE to take a close look at this band as a strong possibility for Eurovision. Their appeal with be wide and varied and sure to gain a strong response from both the Jury and the Public.

There you have it. Eurovision Ireland’s “Thursday Talent Search” for Eurovision/Eurosong 2014 in Ireland. Let us know what you think of our 3 suggestions and we will have more next Thursday for you.