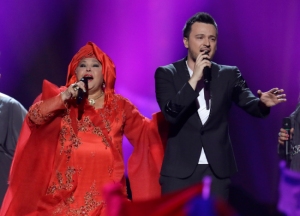 Having met the FYR Macedonian Team of Esma and Lozano in Malmo (whom were FABULOUS) – we were somewhat puzzled by the alleged homophobic claims made by Serbian tabloid newspaper “Kurir” earlier in the week saying that Esma had felt that the “gay lobby” had denied them a place in the Eurovision Grand Final. We here at Eurovision Ireland had even said in our article that we had personally found both singers to be extremely friendly – and we are “out” there (if you know what I mean).

“The story published in the Serbian tabloid newspaper ‘Kurir’ is a complete fabrication.   On behalf of Esma, her management and the Macedonian Delegation for Eurovision, we strongly repudiate these falsehoods. Apart from an interview that will be published on escxtra.com this weekend, Esma has not given any other interviews to media since her return to Macedonia.”

“Esma does not follow any of the Eurovision fan sites, Facebook, twitter, etc. and was most distressed when she was told this morning of this false story.  As a Romany she is particularly sensitive to the percussion of all minorities.  She 100% supports the gay community, and has a strong believe that everyone may live their lives as they choose.  Esma has many gay friends, whom she respects and supports.  Her own personal principles are that all people should be free to make their own choices so they can live free happy and fulfilled lives.”

(YouTube Video Courtesy of Graham2019)
Esma as you may know, has worked tirelessly with those who have been disenfranchised in society all throughout her life and has been recognised with a Nobel Prize nomination. Such claims by the Serbian tabloid, as you can imagine, have deeply saddened both Esma and Lozano.

“As far as Lozano is concerned, I can personally confirm that he enjoyed many evenings in both Eruoclub and Eurocafe during his time in Malmo. He particularly enjoyed the Balkan Music Night and the Closing Party.  Again the comments written about him in the ‘Kurir’ newspaper are utter nonsense!”

Having personally met Esma and Lozano in Malmo we can clearly say that the homophobic claims by “Kurir” were certainly not the experience that we had with the couple at Eurovision. What I will say though is that I lost out on the Eurovision Ireland Writers Prediction Prize – as I was certain they were going to qualify for the Grand Final. We certainly hope that the public get to know the real Esma and Lozano like we did in Malmo!