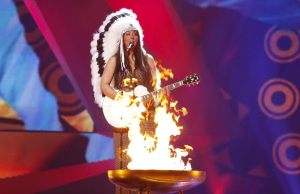 Netherlands – Oh so Charming – Loving Her

Joan Franka was absolutely amazing on the stage this morning performing her song “You and Me”. Like Romania and Russia – the hall was full of press and fans waiting for her to perform and she did not disappoint me.

Overall a beautiful staging for a sweet song

We so liked her performance that we went to her press conference too.

QUESTION: I asked Joan if the song – which is a small love story between a young boy and girl – was about her?

ANSWER: Joan confessed that it was indeed her first love when she was 5 years old and that after writing the song she called him up to tell him that the song was about him. She had not seen or spoken to him since she was 5 which makes the song even more personal

I truly hope that Joan and The Netherlands make it to the final as this is a potential Top 5. If Joan was a fruit she would be a Sweet Cheery and baked in a warm pie – Yumm