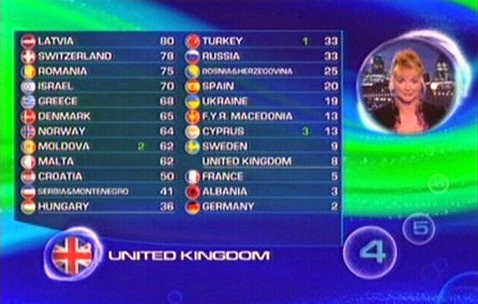 The voting order for the Eurovision 2013 has been announced. This voting order is decided so that it should create a closer voting sequence based on the Jury votes from tonights Jury Voting Dress Rehearsal The order is as follows including the Jury spokesperson.  1) San Marino (John […]

The stage is dark blue and there are giant lit crystals – that look like they came from Superman’s home of Krypton that stand tall on the stage among Natalia and her backing singers. Half way through the song they defy gravity and rise to the […]

Turkey may not be participating in the Eurovision Song Contest this year but their OGAE Club have cast their votes for Eurovision 2013. Will they be awarding Azerbaijan their 12 points? Let’s take a closer look. OGAE Turkey 1 point – the Netherlands 2 points – Russia 3 […]

OGAE Malta – Official Eurovision Fan Club – have “officially” cast their Eurovision votes that our friends at our good friends at ESCflashMalta.com had given to us some time ago. So who did Malta see as this year’s contenders? OGAE Malta 1 point: Austria 2 points: Azerbaijan 3 points: Ireland 4 […]

OGAE Luxembourg – Official Eurovision Fan Club – have cast their Eurovision votes for 2013. Despite not being in the contest since 1993 – please come back – they remain one of the most successful countries at Eurovision with 5 wins with the last one being in 1983. […]

OGAE Greece (Official Eurovision Fan Club) cast their Eurovision Votes. This is one of the biggest surprises of the voting so far as the Greek fans did not give Cyprus any points. Every year there are some things that you can depend on at Eurovision and that is […]