Eurovision And the Marriage Equality Referendum – By Karen Fricker

Eurovision and the Marriag Referendum

While Ireland’s failure to qualify for the Eurovision final this week is surely disappointing, there is another vote currently affecting the country in which the stakes are monumentally higher. Today, Friday 22 May 2015, the Irish public goes to the polls in a marriage equality referendum, which, if it passes, will make Ireland the first country in the world to legalize gay marriage through a popular vote.

The timing of this referendum has created a tricky situation for Eurovision fans attending the contest this week in Vienna. They have been pulled in multiple directions as they negotiate their desire to be present for their favourite song contest with their participation in this historic moment for Ireland. 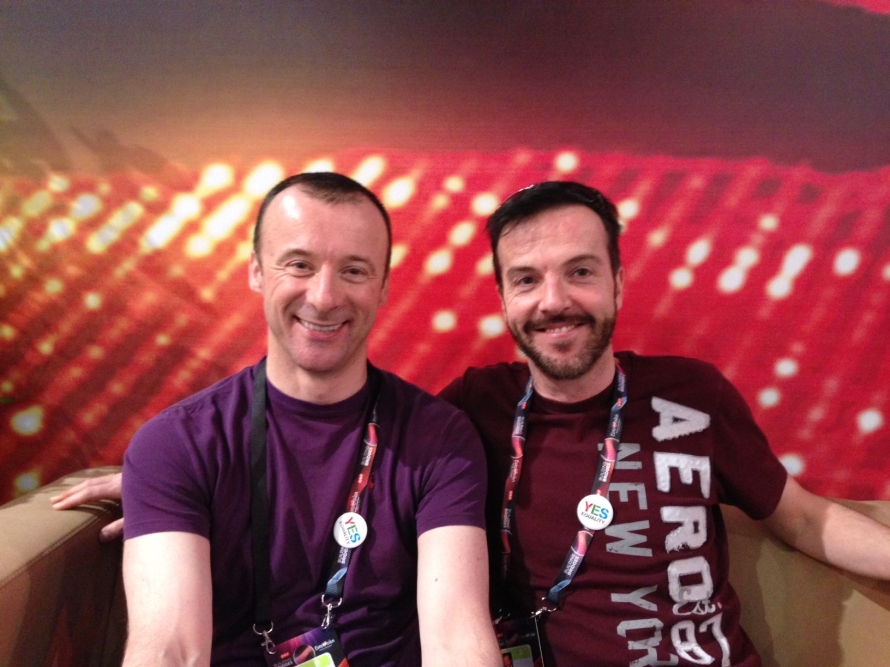 Diarmuid Furlong, president of the Irish section of the international Eurovision fan club OGAE, and his civil partner Willie Murphy have been in Vienna all week for the contest. They are flying back today to cast their votes in Wexford, then returning on Saturday for the contest final.

“It’s too important [not to vote],” says Murphy. “This referendum is a once-in-a-lifetime moment that will affect our lives. We’re looking for the same treatment as anyone else – why shouldn’t we have equal rights to every Irish citizen?” Furlong estimates that more than 20 of the some 200 Irish fans in Vienna are, like him and Murphy, making the return trip home to vote.

Barrister Dermot Manning obtained a postal vote, and thus has already cast his ballot. “I was determined not to be disenfranchised,” says the Dublin resident. Manning has been attending Eurovision for over 20 years. “For me, the ESC is a symbol of the Europe we all want to think exists, where we all come together year after year in a different city, engaged in healthy competition in an atmosphere of cooperation, friendliness and support. I love that.”

Cork couple Jonathan Neville and Frank Dermody were married last May in Copenhagen at last year’s Eurovision; the Danish government relaxed its laws so that same-sex couples could marry there without the usual three-month application period. While civil partnership for gay couples is legal in Ireland, this was not an option that appealed to the couple. “Civil partnership… feels token,” says Neville. “We wanted to validate our marriage.” 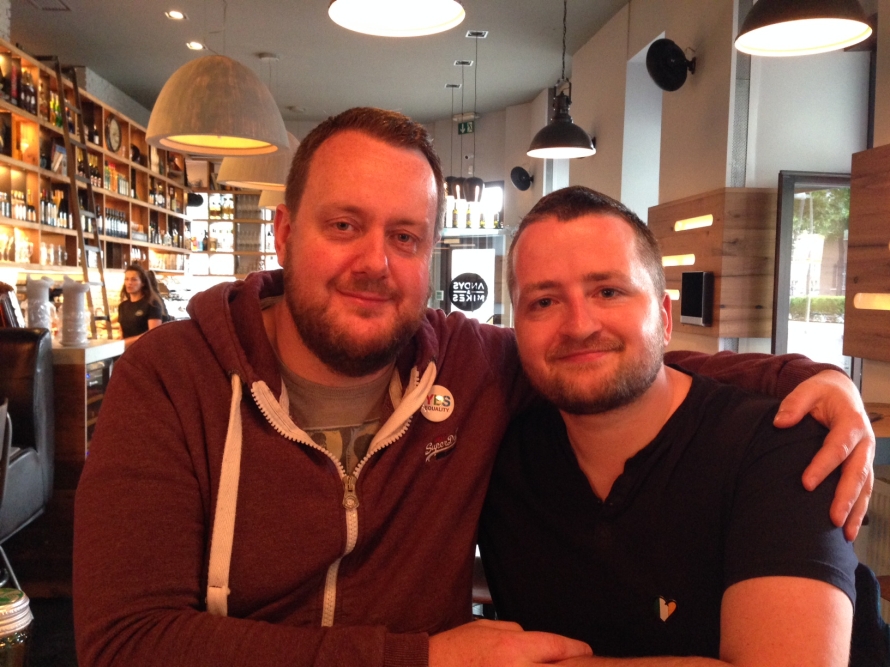 Both have looked forward to this week in Vienna as a way to escape an increasingly challenging atmosphere at home. “I have lived in Ireland 36 years – my whole life,” says Dermody, “and I have never experienced the kind of vitriol and hate that we’ve seen since this campaign began. I can’t wait for it to be over.” They have found, however, that events back home have not been far from their minds. “Being out here actually makes it harder. We feel kind of useless,” says Neville.

One of the leading voices in the No campaign, Keith Mills, is also attending the contest; he is flying back to Dublin to vote today and returning to Vienna tomorrow. He was not initially planning on returning to vote, but decided to do so as he became more involved in the referendum debates. “Someone came to me who is also gay and who also shares my point of view [about the referendum] and said ‘I appreciate what you’re doing, I’ll subsidize your flights back.’” While Mills did not take up this offer and is paying his own way, this approach appears to have had a galvanizing effect.

Has the referendum – including in some cases working cheek by jowl with people who have deeply opposing political views to their own — affected these fans’ experience of Eurovision this year? “I’d be lying if I said it didn’t have some impact,” says Manning, “but I think we’re able to accept that people will differ and ultimately the people will decide.”

“We can separate the two,” says Willie Murphy. “We have had people at parties to our house to celebrate Eurovision who are from the other side – there is no animosity or nastiness. But a lot of other people can’t create that space — it’s very divisive.”

“Since I’ve been here it hasn’t been an issue,” says Mills. “I’ve been made to feel welcome; I have had reconciliation with some people I’ve fallen out with online.”

A gathering is planned at Flanagan’s Irish Pub in Vienna on Saturday to watch the referendum results come in. How will these Eurovision fans feel if the result is a Yes? “We would be euphoric — a Yes vote and Eurovision all in one day!” says Furlong. For Neville, “it would bring back the moment when Frank and I got married last year. We would feel validated and accepted in our own country.” Dermody anticipates a sense of “relief” if the Yes side wins.

For Mills, if the result is Yes, “I will be disappointed because we will be the first country to give up the concept of a one man, one woman marriage… On the other hand I am a democrat — if you believe in democracy you have to accept the will of the people.”

Karen Fricker has covered the Eurovision Song Contest for the Irish Times since 2005, and has co-directed two academic research projects on the contest. She is the co-editor of Performing the ‘New’ Europe: Identities, Feelings, and Politics in the Eurovision Song Contest (Palgrave, 2013). She is an assistant professor of Dramatic Arts at Brock University, Ontario, Canada.