GERMANY : #JoinUs for our LIVE ROLLING BLOG of the Wild Card Selection for Eurovision 2015 at 22:00 CET

GERMANY : #JoinUs for our LIVE ROLLING BLOG of the Wild Card Selection for Eurovision 2015 at 22:00 CET

Tonight Germany will select the one act that will join the 7 established acts in their Eurovision 2015 selection aka Unser Song für Österreich.

The show begins at 22:00 CET and you can watch HERE on the OFFICIAL German Website

You can follow our LIVE BLOG HERE – You know the deal – JUST REFRESH THE PAGE to get our thoughts on the each of the songs.

Got your Stein of beer and your German sausages ready – I have!

Our host has mentioned Fifty Shades of Grey twice and Justin Bieber once – I don’t know whether to be turned on or scared!

Last Year’s Wild card winners and German ESC Representatives Elaiza look as scared as I am with the 50 Shades of Grey and Bieber comments!

Now this is right up my alley – Oh that could be painful if you are still talking Fifty Shades of Grey. They are a funky band that have soul by the bucket loads! Love their laid back and uber cool swing. A groovy start to the show and I would certainly have this on my i-tunes. Loving them!

Ok poor Lars has an unfortunate surname so get the giggles out of the way or see a Doctor. The song maybe called ‘Tornado’ but it was more a gentle breeze. The song didn’t have much bite to it. In fairness to Lars he can sing but he lacked much stage presence. I think he would get swallowed up on a Eurovision or get sucked up by the Eurovision Tornado that he sang of. Ah Bless Him! Come back in a few years Lars.

When in the first line of the song the lyrics are “The Winner Takes It All” you know you are on to something good! This is some modern German Jazz Funk from a girl that knows how to sell a song. ‘Imperfection’ – well I heard none of them in this song. This song has serious potential – one to watch!

What is it with the Wold Card selection and these names. Moonjos sounds like an Space Diner! This is like The Common Linnets but it is Waylon and his younger brother. A bit of a mixture of a little country, a little schlager lite, a little Ed Sheeran – a gentle guitar pop song that had the locals clapping along like it was the last day of Schlager. Cute but it didn’t get me hot under the collar. 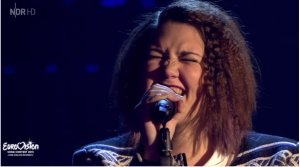 Louisa I feel your pain girlfriend. That was one ‘Boomerang’ that I hope doesn’t come back. Adele has a lot to answer for with all these angst ridden ballads of people being hard done by in love. Sadness sounded and looked painful here and one that I think Europe would use as a toilet break at Eurovision – Sorry 😦 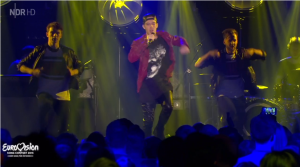 Germany’s answer to Eric Saade but this one can actually sing! Oh did I actually just say that about the Swedish Pop Prince. This is a Pop/RnB/Drum N Bass song that I was rather taken by. It was a performance that actually suits the bigger stage so you have to give him props for that. It needs some tidying up but he and the song have potential and who doesn’t like a bit of eye candy. As Wild cards go then this is one that could do well.

Stalker Alert! “I don’t know who I am, I need you!”. Another song of a woman that has been hard done by. Well it happen to us guys too! This was all doom and gloom and very little light and shade. If you are going to do angst then I want to see you screaming and pulling your hair out. I just felt like doing it to myself after that performance. 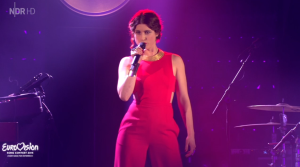 ‘Jump The Gun’ in a Jump Suit. Ann Sophie is sassy and sexy and knew how to play the audience and the camera like a spider’s web and an unsuspecting insect. She just wrapped up all up in her jazz song. She would be great at the German Final. You can tell that she is experienced at performing and that is what you want! Lovin’ her! 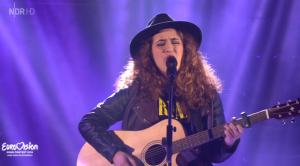 Well I felt I was on a ‘Battlefield’ myself listening to that. I felt every painful shot to my senses. My 2 pet peves – Hats and HUGE Guitars! This was a song stuck in first gear. It was like a tank stuck in the mud going around in circles. It was all very busker on a street corner and not the Eurovision stage. I fly my white flag and I surrender! Not for me sorry 😦

It’s four girls that met at the shopping mall and decided to go singing for Eurovision. That may sound cruel but that is a compliment. They are 4 very relatable girls that teenagers could identify with. A cute song that needs some more rehearsal but it could work. Not performed perfectly at all but it has potential – Totally. Think Tiffany’s ‘I think We’re Alone Now’ times 4. We all like a one hit wonder.

That’s your lot! All the songs have been performed. I love German efficiency! No messing about!

Aden – We Are On Fire

If I had to narrow the choice I would like Klangpoet and Sophie and Aden. If i had to pick who I think the German public will pick I might go for Sophie.

IMPORTANT : If women are allowed to change their mind then so should men. I am going for Ann Sophie ‘Jump the Gun’ as both mine and the German choice to win the Wild Card.

Interval Act time and it comes courtesy of Mark Foster – no not the Hot British Olympic swimmer but the Geek Chick German singer. One song from him thankfully.

Recap of the songs and their voting numbers

The Results Are In 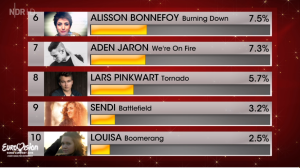 Oh I got it right! Well done Ann Sophie