Germany : Get to know the Finalists for the German Eurovision 2015 Selection 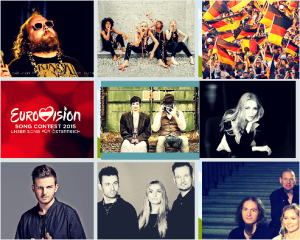 Germany – Get to Know the Contestants 2015. Photo : Eurovision Ireland

Germany – Get to know 7 of the 8 finalists for the German Eurovision 2015 selection. Is there another Lena here?

The 7 established acts who will compete in the final of Unser Song für Österreich, to be held on March 5th were announced today by NDR (German National Broadcaster) They will be joined by the winner of the Wild Card Selection that will be known on February 19th.

According to their Bio

“FAHRENHAIDT is modern Nature Pop – inspired by nature and reacted with modern electronics. FAHRENHAIDT is the new project of two internationally successful Berlin music producer Erik Macholl John and Andrew and are joined by Amanda. They describe themselves as to escape the city and want to FAHRENHAIDT to encourage people to come to rest. But how do you switch off? Permanent vacation? Is not there for most.

They describe themselves as  a Medieval Music / celtic & nordic Folk / Paganfolk band and play many old and celtic instruments. They are based in Munich.

Alexa is from Berlin and is signed to Warner. Her music is described as German/Pop. According to her bio

“Alexa Feser’s songs are impressive precisely formulated short stories, impressive paintings from music. Sung with the intimacy of a singer-songwriter – without holding in the narrow confines of the genre: “Gold of tomorrow” is her debut appearing at Warner Music in the fall, and it is unmistakable Alexa Feser: a clear statement in words and music.”

They are a band that come from Cologne. They describe their music as

“somewhere between folk, country and pop. alternatively, one may also find it if you like a pinch of blues now and then and some jazz”

Andreas is a singer/songwriter and producer. His genre of music is blues, soul, folk and rock. He comes from Gemünden am Main in Germany. He appeared on The Voice of Germany in 2013.

They are a female quartet that come from Berlin. They describe their music as “Electric Ladysound” – you can’t make this up! Their Bio says their music

“with its multimedia performance from stage choreography and exceptional crossover of minimal electro, pop and R’n’B, combined with a unique filigree language aesthetics”

Is actually a male solo singer Jewgeni Grischbowski. His music genre is House / Electronic / Dance. He is a Russian/German producer and songwriter based in Munich and signed to Polydor/Universal Music.

He started his career in 2009. His debut EP “Get The F**k Up” reached #4 in the German Club Charts in 2010. Afterwards he released 4 EP´s and several remixes for artists like Gorillaz, OneRepublic, Skrillex, Pendulum, Iggy Azalea and many more. His Remix of “Gorillaz – Feel Good Inc.” reached #2 in the Hypem Charts. The Remix of “Gorillaz – Dare” climbed up to #5.

There you have your 7 German Finalists that will be joined by the Wild Card winner. What is interesting is that some of the music for the acts that is on YouTube is actually eligible for Eurovision 2015. So take a look as one of them could be in the final.

There is certainly a varied choice of music in the German selection.

What do you think of the 7 acts announced? Who would you think would suit Eurovision most? Is there a winner there?