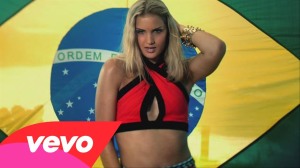 Norway’s Eurovision bridesmaid in 2013 Adenén, is set to be one of the songs that you will be sick and tired of hearing this summer as ‘World Cup’ Fever is set to sweep the globe.

Adenén scored a massive hit with her Melodi Grand Prix second placed song ‘Bombo’ where is topped the Norwegian charts and even broke the charts in it’s Scandinavian neighbours. Well get set to hear her new song ‘Olé – from Rio to Berlin’ as the teenager sings on the new Official FIFA World Cup Album.

The song is exactly what is says on the tin – a summery chant that is hoped to get you all shaking your maracas as you watch the ‘Beautiful Game’. The song is featured on the official World Cup 2014 album that includes songs from singers like Shakira, Sergio Mendes, Santana, Wyclef Jean, Jennifer Lopez and Ricky Martin. Talk about punching above your weight but remember that Adelén was signed by Simon Fuller (who manages The Beckhams and Jennifer Lopez to name but a few) last june – SEE HERE

A lot of navel action on show in the video for Olé that samples the Bananrama’s hit ‘Na Na Hey Hey Kiss Him Goodbye’ in the chorus.

Whilst Bananarama was a “Knock Out” I fear Adelén is more of an “Own Goal” but I am sure that following 4 weeks of it being played on every football show on tv I will become infected by its Latin Charm – oh there goes one of my feet a tapping as I write!