“Twerking” – Eurovision has been doing it long before Miley Cyrus! 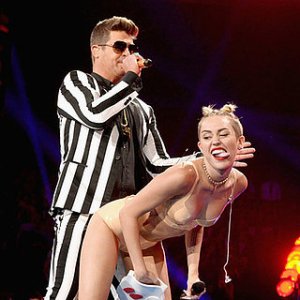 “Twerking” – the new word in the Oxford English Dictionary is nothing new to Eurovision. In fact our Eurovision stars could certainly teach Miley Cyrus how to do it with some style and panache. She certainly needs help in the art of “Twerking” following her disastrous performance at the VMA Awards on Monday!

We felt compelled to bring you the Top 10 “Twerking” moments from Eurovision over the years in the hope of saving Miley Cyrus from a lifetime of “BAD Twerking”. In case you don’t know exactly what “Twerking” is,  then here is the acting legend Morgan Freeman to give you the complete definition – we would believe anything that man says in his amazing voice!

“The Frankfurter Twerking” starts off our Top 10. You know that there is some serious “Twerking” on its way when you have a man in tight silver trousers (hence the name of this strand of “Twerking”) and a World Renowned burlesque Artist on the stage at the same time. Add in the title of the song “Miss Kiss Kiss Bang” and you are getting in that “Twerking” frame of mind. What Dita Von Teese didn’t do to the lip shaped sofa on stage, and Oscar for that matter too, brings Germany into the Top 10. Pay attention Miley!

“Twerking” is not just confined to interaction with other people – as Estonia proved in 2008. Twerking with an inanimate object can become addictive and should be done under strict supervision – like a crowded arena in Belgrade. Be prepared for some backlash, as many people frown on this form of “Twerking” – as you will hear from the from the audience. This time around an innocent piano was in the wrong place at the wrong time. Pianos beware of singing Estonians “Twerking”!

Germany seem to be a nation of “Twerking” Fanatics. They appear for the second time in our Top 10. “Twerking” has to be consensual and should involve a “safe word”. In this case the safe word was “Horn” or “Guildo Horn” to be exact. Stripping is an integrated act in “Guildo Twerking”. Mr Horn proved that getting your kit off – even if it is a turquoise velvet suit and cape – will do the trick. However Guildo almost crossed over the line of “Twerking” decency by preying on innocent and unsuspecting bystanders. You go to Eurovision and manage to get a front row seat at “Europe’s Favorite Show” – only to be “Flash Twerked” by a BIG GERMAN. Beware of German’s bearing “Horns”.

The “Adonis Twerking” requires several key attributes from the Twerker. Firstly they should have the body of a God and then they should know how to move like he’s “The Greatest Dancer”. Last but not least, he should be able to remove articles of clothing with the slightest touch. Check, Check and Check – if your name is Sakis and you are from Greece. 2004 saw the man “Shake It” and manage to strip down to a t-shirt that barely covered him. Furthermore he managed to remove not one but 2 dancers costumes in what we call the “Double Twerk”. This man should hold classes and Ms Miley Cyrus should be taking notes! A master class in “Twerking” yourself and others.

Iceland maybe a cold country – well it is full of ice – but in 1997 they proved that it was not just the ozone layer that was heating up the planet. This is known as “Double Jointed Twerking” and should not be attempted until after consultation with your Doctor. This form of “Twerking” is best practiced in a group – in case any member of the “Twerking Ensembles” joints cramp and lock out. These “Twerking” movements are carried out by trained individuals and should not be attempted at home. Thank you Paul Oscar for this Master Class.

#4 – France 2010
This is “Zumba Twerking” or if you are a fan of Destiny’s Child then this is also known as “Bootylicious Twerking”. As the French would say this is all about the Derriere. This calls for synchronized derriere “Twerking” – so rhythm is completely necessary. You need a good Zumba tune and be able to get your groove on. Be ready to get your bottom spanked – Matador style – OLE. Miley are you still taking notes – there will be an exam at the end of this!

Top 3 and we have a terrible form of “Twerking” that causes a lot of distress to many couples across the globe. This is called the “Over Compensating Twerking” and was pioneered by that little species of Spanish snake called the “John Cobra”. Now you should not judge people with this affliction. You know – everyone seems to be taller and more accomplished than you. People don’t appreciate your greatness – well that is what you say to yourself every night as you lie in bed alone. It is not advised to sit on a park bench on your own if there is a person suffering from “Over Compensating Twerking”. You are likely to be dragged to your feet and kissed like there is no tomorrow. There is now a support group – “Twerking Anonymous”. Use it John Cobra!

“Rave Twerking” is on the increase. Held in underground shelters or abandoned factories, these can be 24 hour events that see people of all backgrounds come together for this addictive form of “Twerking”. A simple dance off between 2 women – that happens all the time – can quickly escalate into perilous situations with thousands of people attending these illegal gatherings. Heavy exposure to this form of “Twerking” can see one hallucinating with sword wielding dancing Ninjas, Smirking Cheerleaders and Sun glass/Bikini wearing female cage fighters. With elements of the “Booytlicious and Flexible Twerking” also emerging in this strand of the “Twerking” – this is not for the faint hearted. For those not possessing a pace maker – Enjoy!

For the ultimate “Twerking” experience, you have to go back to 2005 for its origins. The “Disco Twerking” is highly contagious and can have side effects that last – well FOREVER. This form of “Twerking” comes with a government warning and should only be attempted once you have mastered the earlier 9 forms of “Twerking”. The manufacturers of this “Disco Twerking” accept no responsibility if you have not read the full set of instructions.

“Disco Twerking” makes one lose conscious control of your hips to begin with. It starts with a gentle swaying to and fro but then builds into full “Twerking” thrusting. Add the removal of clothes and you are in full “Disco Twerking Euphoria”. Like the “Adonis” form of the “Twerking”, you will be compelled to wear a tight white t-shirt that just about fits you. Onlookers will be compelled to join you in your “Twerking” rush.

However once the “Disco Twerking” is experienced – the need to feel an even bigger “Twerking” rush takes over your life. This can lead to more overt forms of “Disco Twerking” that can occur in any place and at any time. Onlookers are compelled to look as the “Disco Twerking” takes on a more exhibitionist manifestation. This lasts for years and is not known to have an cure to date. They need your help to bring this “Twerking” to Miley Cyrus as we fear for her “Twerking” life. Dean has worked tirelessly to get Miley the support she needs. Help us share this cure for “Bad Twerking” with Cyrus today and help stop the suffering for her – AND ALL OF US!

So there you have the “Eurovision Twerking” history. Remember “Twerking is not just for confused former child stars – but for us all if done with STYLE”. Any further bad “Twerking” from Cyrus will be dealt swiftly by the Authorities with a possible lifetime ban from “Public Twerking”. You have been warned!