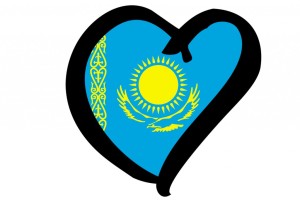 According to Kazakhstan Media Channels (KazMedia Center) the country is negotiating membership of the European Broadcasting Union, with the goal of participating at Eurovision 2014.

There have been several factors that the national broadcaster in Kazakhstan has worked to comply with, in order to gain EBU membership. KazMedia Center go on in their statement to list these areas.

” First, a candidate should actively use the services of the Union (EBU). Second, you must purchase regularly, broadcasting rights of the different events. Thirdly, the country should have its own advanced broadcasting technology facilities .

Also the report claims that the  Kazakhstan National Broadcaster ” is waiting for a response from the Asian Broadcasting Union Pacific on Ortalygy KazMedia request to join this organization . ”

Many European readers will not know exactly where Kazakhstan is so here is a map for you. As you can see the country’s western border is on the same line of longitude as Azerbaijan and Russia. Kazakhstan is a transcontinental country, with most of its territory located in Central Asia and a lower (west of the Ural River) in Europe. It is the ninth largest country in the world and one of the six independent Turkic states together with Turkey, Azerbaijan, Kyrgyzstan, Uzbekistan and Turkmenistan. Official estimates put the population of Kazakhstan at 16,500,000 as of April, 2011, of which 46% is rural and 54% urban population. It became independent from the USSR in 1991 and its capital is Astana.

As for their Eurovision interest – well you all know that we worked with http://esckaz.com this year in Malmo where they shared their Videos with Eurovision Ireland. They have been in existence since 2001 and have a very strong presence at the Press Center at Eurovision each year.

So will we be seeing Kazakhstan at Eurovision 2014?