FINLAND – We caught up with the beautiful Hanna Sky who is a finalist in UMK – Finland’s National Selection for Eurovision 2014. We spoke with Hanna about how she got into music and what was her inspiration behind her song “Hope” – which is her first ever […]

Finland – Today we had the pleasure to interview UMK 2014 Finalists “Softengine” who are hoping to win the Finnish ticket to Eurovision 2014 with their song “Something Better”. We were happy to be their first English interview and the guys proved that their talents are not just […]

RESULT : Finland has their 8 Finalists for Eurovision 2014

FINLAND : Tonight the semi final of UMK 2014 took place and 8 acts were competing for 6 places in next week’s Grand Final. The 8 acts hoping to win the public support and join Softengine and Hanna Sky in the Grand Final were 1. MadCraft – Shining bright 2. Hukka ja […]

Finland – Welcome to our live rolling blog for the Semi-Final of UMK2014 aka The Finnish Eurovision National Selection for 2014. Just refresh the page for our live commentary on the show. You can watch the show with us HERE and tell us if you agree with our […]

Finland : YLE (Finnish National Broadcaster) have announced the running order for this Saturday’s Semi Final of Uuden Musiikin Kilpailu (UMK). , Finland’s national selection for Eurovision 2014. Eight acts will compete for 6 places in the Grand Final where they will join Hanna Sky and Softengine. This […] 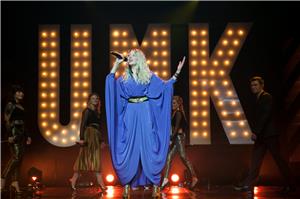 Finland – Tonight was the second heat in UMK 2014 aka Finland’s search for their Eurovision 2014 act. Six acts competed for 1 direct place to the Grand Final, 4 places for the Second Chance Semi Final and then the last placed act leaves the contest. After the […]

Finland – Welcome to our live rolling blog for the Second Heat in UMK2014 aka The Finnish Eurovision National Selection for 2014. Just refresh the page for our live commentary on the show. You can watch the show live HERE. There is the pre show on NOW and the […]

Finland – Tonight is the Second Heat of UMK2014 – The Finnish Eurovision 2014 Contest.   Format of the show There are 12 songs in total in the Finnish selection and tonight the second set of 6 songs are competing for 1 direct place to the Grand Final […]

Finland will again turn to the show Uuden Musiikin Kilpailu to find their representative for Eurovision 2014. Last night the first 6 acts took to the stage for the judges. You can watch the videos below or watch the entire show HERE Fashion is certainly something that Finland appears […]