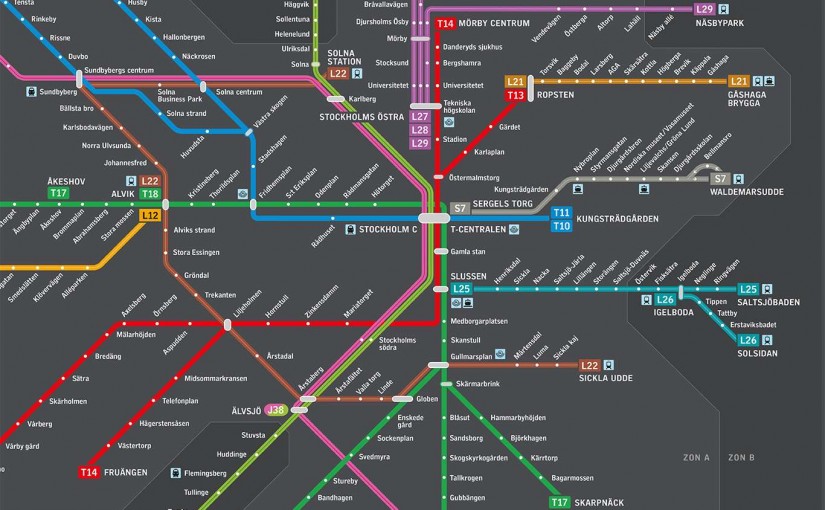 Välkommen till Stockholm! The Eurovision Song Contest 2016 has started its rehearsals in beautiful sunny Stockholm! While we know you’re all eagerly following our updates from inside the Globe, we thought you’d also like to know a bit more about this year’s host city.

In this series of articles, we’ll look at various aspects of the Swedish capital, all aimed at helping you make your Eurovision trip go as smoothly possible. After all, one of the (many) joys of Eurovision is getting to explore somewhere new!

First off, let’s take a look at Stockholm’s transportation systems and how to navigate them. So grab your guidebook and let’s go!

Stockholm has an extensive public transport system that includes buses, trains, metro and even ferries. Similar to London’s Oyster cards, Stockholm SL Access Card can be topped up for all public transport journeys across the capital. If you’re only making one short trip or using public transport infrequently enough that buying an SL Access Card isn’t worth the expense, you can also buy paper tickets for a set time duration (75 mins seems to be the cheapest ticket).

REMEMBER! You must get your tickets before you travel and CANNOT buy tickets directly from bus drivers! (We found this out the hard way, staying right the way out in a Stockholm suburb!!) Another point to remember is that Stockholm is built on an archipelago of islands, so although a lot of the city looks close by, it might take a lot longer to arrive than you expect. Just bear this in mind if you like to walk, like me!

For Stockholm’s Eurovision programme, these are the stations you’ll need:

Stay tuned for our other Stockholm articles, coming soon! As they say in Sweden, vi ses snarrt!