IRELAND : Eurosong Finalist Andrew Mann Struts in the “Middle Of The Dancefloor” 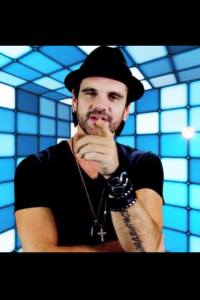 Is it wrong for us to openly say that “We love Andrew Mann – Even More!”. Yes the Eurosong Finalist and Voice Of Ireland singer, released his EP earlier this year “Middle of the Dancefloor”.

We gushed over his 4 track EP when we reviewed it – but how could we like it even more? I can tell you how – by looking at the FUNKY video that Andrew has made for the song.

The song itself is a Rock/Pop/Disco dance floor filler.Think Daft Punk and Robin Thicke but with some attitude. Andrew’s great vocals makes this song jump off your playlist.

Who knew that Andrew had some serious hip action. Shakira better watch out as Andrew’s “Hips don’t lie” either. A few well placed thrusts and crotch grabs and it has a hint of a Michael Jackson. If Andrew’s devilish looks to the camera are not enough for you, then he has assembled some of Dublin’s best looking men and women. Everyone “loves a Bad Boy” – but there is nothing bad about this song or video.

Slick, catchy, edgy and some funky moves makes me want to press repeat again and again and again on my iTunes. And if you haven’t got his EP yet – then why NOT? Fear not as you can download it here today

Andrew came second in the Irish Eurovision National Selection in 2012 with the amazing song “Here I Am”. We have said it before and we will say it again – “Andrew has to come back to the Eurosong Final” – and we are not taking “no” for an answer.

Andrew consider this the beginning of our “Bromance”. When are we hitting the town to strut our moves in the “Middle Of The Dancefloor”. I am serious!

Bravo on a great video. Check it out people. Tell us what you think?