IRELAND – Brian Kennedy in danger of losing out in Song Contest 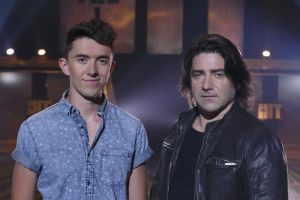 Irish Eurovision Representative 2006 – Brian Kennedy looks like he may miss out on making the final of “The Hit” in Ireland to newcomer Ryan O’Shaughnessy. Photograph courtesy of Mirror.ie

Ireland’s new show “The Hit” – pits 2 established Irish Singers against each other each week and last Friday saw Brian Kennedy (Eurovision 2006 Irish Representative) in the hunt to make it to the final of the “The Hit”. Here is the full show on the RTE Player

Brian was up against new Irish Singer “Ryan O’Shaughnessy”. The concept of the contest is that two singers select a song by new writers after just hearing a few minutes of the song. Brian and Ryan then take the song and record their version of it. The songs are released to download and then the song which sells the most downloads goes through to the final at the end of the week.

We tried to find a video of Brian singing the song “Try” that he selected, but we could just get the writer of the song singing an acoustic version of the song.

As of this morning Ryan O’Shaughnessy was at #7 in the Irish charts and Brian Kennedy was outside of the top 10 and risking elimination from the contest.

You can hear both songs on the RTE player link above. The winner will be announced on Friday afternoon. Which song do you think is best and should make the final of “The Hit”

This Friday coming we have a very special treat as one of the contestants will be Eurovision Legend Johnny Logan! Looking forward to that!