“It’s high time we just ditched the shambolic mess that is Eurovision” – Our Response to that! 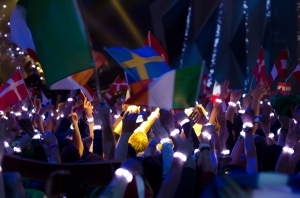 Should We Ditch Eurovision? Photo : Wikipedia

Ireland – “It’s high time we just ditched the shambolic mess that is Eurovision” are the cries from Irish publication “Herald.ie” yesterday. We thought we would take a closer look at “How inaccurate this piece of writing – notice I didn’t use journalism – really was and enlighten the author Chris Wasser on the economic and cultural importance of Eurovision. As my Mother would say “It is all in the name!”.

Now where does one begin to debunk this inaccurate attempt to call Eurovision an event that is “wasting taxpayer’s money”.

Personally I wouldn’t even wrap my fish and chips or line the bird-cage with this nonsense but since “Wasser” took the nano second to research his piece then I will adopt the role of School Teacher – or Head Mistress – if Wasser continues to make such pre-school errors!

Where exactly did Ireland place at Eurovision 2013?

Whilst Wasser was morning Ryan Dolan’s 5 points in the Grand Final of Eurovision 2013 – like we all were – there is one glaring fact that Chris fails to mention. There were 13 other countries that failed to qualify for the Grand Final. I think that means that we placed above them too. It is called a Semi Final – you know like the one at the World Cup that you mentioned in your article. I would hazard a guess that Wasser might not be fully comfortable with the intricicies of the “Off Side Rule” without the assistance of Google.

However I digress. Yes 13 other countries placed behind Ireland in the Semi Finals and didn’t get the opportunity to perform to an estimated 170 million tv viewers. Imagine that – 170 million people seeing your work – a nice dream isn’t it Chris? Hey for a “shambolic mess” a lot of people tune into it. Actually to even make it more compelling is the fact that the Eurovision Song Contest was the 10th most watched tv show in Ireland with an average of 771,500 people tuning into the show. Seems that us Irish like a bit of Eurovision. Just for you Wasser here are the full tv ratings for Ireland in 2013 – call it a free lesson in research and data analysis skills. I only charge tuition fees if I have to explain it twice to you.

To rub salt in the now open wounds, the figures for Eurovision 2013 were an increase year on year for RTE. Actually they have increased year on year for the last 4 consecutive years. #Result

That old chestnut of “Block Voting”

“Block voting has ruined it” – Oh my Dear Wasser how factually wrong you are here again. If you look at the results of Eurovision since the inclusion of our new European neighbours – the results of the contest show that you do not win the contest by receiving the most 12 or 10 points in this post era of “Terry Wogan Scare Mongering”.

Let’s just take last year’s result for example. The lovely Emmelie de Forest won the contest for Denmark. Yes Denmark – that country so well-known for “Block Voting” – eh NOT! In the final results neither did she/Denmark receive the most number of 12 or 10 Points in the contest. Those accolades went to Azerbaijan and Ukraine. So in order to win Eurovision you need to have a broad appeal to Europe and score the most 6-8 points!

The cost of Eurovision to the taxpayer?

Keeping up with me Wasser – good boy! Next up is the 200 thousand Euro that you claimed is “wasting taxpayer’s money”. Ok let me put that into context for you. That 200 thousand Euro entitles RTE to approximately 8 hours of prime time tv. Now here is a question for you Wasser – and you can use Google if you want – but have a guess how many episodes of Fair City that figure of 200 thousand may equate to? Any idea? Now for all my Global readers “Fair City” is one of Ireland’s most popular home produced tv soap operas. Each episode is 30 minutes long (including the commercials). Well the figure of 200 thousand would get you approximately 3 episodes or 1 and a half hours of Prime Time television.

So from my primary school days, I would say that RTE and the tax payer are roughly getting 6 hours free prime time tv viewing for the Irish public – who look at the show (remember the point I made above ). So in essence RTE is getting a massive bargain for the tax payer and providing tv that they want to look at for less than 200 thousand euro. Maths pop quiz Wasser – is that “cost-effective”?

Our contestants in Friday’s Eurosong Final are – as you quote are “X-Factor rejects”. Tut Tut Tut Wasser. Not been doing your homework again! Here is your assignment for tonight. Look at the Top 5 results for Eurovision for the last 5 years or so. WOW the number of former talent show contestants is well,  just WOW! See it is a pretty prudent decision to tap into this source of talent for several reasons. I will just list 2 as I don’t want to overwhelm you on your first Eurovision and Investigative Journalism lesson. That would be mean of me to do that to you.

X-Factor/The Voice/Idol contestants bring with them tv experience. In a modern age where the social media savvy person wants “groovy” graphics and intricate camera shots – you are going to get that experience with former talent show contestants. Did you know that all broadcasters have to submit their camera shot requests to the host Eurovision broadcaster over a month in advance? Why is that? It is because Eurovision has evolved from the stationary one camera show that it was in the late 1950’s!
Secondly – talent shows like the ones you don’t seem to like the contestants from – are the benchmark for what Eurovision has to surpass each year. That is what the public want! They want to see the show, see the special effects and see the artists. So as Eurovision/RTE taps into that “X-Factor Generation” then they are again giving the people exactly what they want and expect.

Why should we stay in a “hideous, dated and shambolic TV circus”?

You asked why we should stay in this “hideous, dated, shambolic TV circus”. Well if the show was so bad I would seriously doubt that it would continue to be in existence since 1956. I know many newspapers that haven’t lasted that long – wink wink nudge nudge. Not only has the Eurovision song Contest survived but it has expanded and become popular even outside of Europe itself! Also it has spawned the Junior Eurovision Song Contest, The Young Dancers Contest and the European Musician Contest. Not sure about you Wasser but that is an “Oprah Light Bulb” moment for me! Imagine that next year will be the 60th running of the Eurovision Song Contest! I think that several of Fraiser’s spin-off tv shows didn’t last 60 days never mind 60 years!

Answer me this “Wass” – I think we are friends at this stage that I can abbreviate your name, though you will still refer to me as “Eurovision Head Mistress/Master” – when our athletes, footballers, rugby players and sports people don’t win any international tournaments – am still waiting for a piece of silverware from the National Soccer team – do we all scream “Leave the Euro’s, Forget about the World Cup qualifiers”? Sorry I didn’t quite hear you there Wass? Eh no we don’t! We look at what can we change to make us more successful. Jedward and the mentor system transformed our luck and brought us back to the Eurovision Top 10. Now where are our soccer team ranked lately? Yes they would bite your right arm off to be in the Top 10!

So before you throw your toys out of the playpen, think about what you are asking a Eurovision loving, viewing and loyal country to do! We don’t tell our sports men and women to throw in the towel and miss out on representing their country on an International stage. So why do you ask our singers to give up the opportunity to represent our people, flag, country and honour?

I for one am patriotic and am glad that we have the freedom to select who we send to an International stage. However if you decide to not tune in on Friday to our national song selection, then really do you have the right to comment on the show and the outcome? You get the chance to influence the result and you can go from being on the sidelines to actually playing on the pitch with your fellow country men and women who want to represent this great country of ours!

Just a few pointers for you to digest before you ask people why we continue to enter Eurovision. So turn that frown upside down and make sure to get your facts correct in future or it will be detention for you Chris.

For everyone else out there, the Irish Eurosong Final takes place tomorrow Friday 28th at 21:35 (GMT) on The Late Late Show on RTE 1 – and also available for our international viewers you can watch on-line live HERE