Netherlands : Anouk is treated to an Orchestral Version of “Birds” 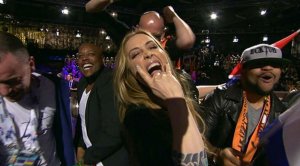 Anouk was treated to a live orchestral version of her Eurovision song “Birds” on live Dutch tv. The Netherlands have been waiting for a return to the Grand Final of Eurovision and The Top 10 for some time and Anouk delivered in Malmo.

She was appearing on the Dutch talk show “Pauw & Witteman TV-show Holland” where the star looked over her Eurovision Memories and talked of the future. She was treated to an orchestral version of her Eurovision song “Birds” which the normally cool and collected singer was taken aback

We also have a full copy of the interview that she gave on the show – if you speak Dutch then you are in for a treat.

Should The Netherlands search internally for another big star to represent them at Eurovision 2014 or do an open call for performers?