The stage was set at the BelExpo tonight for both the Opening Ceremony, as well as the drawer for the opening country, closing country and Belarus’s running order position. The artists were introduced in country alphabetical order. This included a quick chat with the hosts – Anna Kviloria […]

Following on from my series of daily #RichardReflects articles in Lisbon, I’ll be writing in my #MinskJournal throughout my time here at the Junior Eurovision Song Contest. Day 1 can be summed up under two topics, the first been arriving into Minsk. For those that are yet to […]

What does an Australian, Scotsman, Englishman and a couple of thousand screaming Belarusian women got in common? Yes in all attended the Alekseev Concert at the Sports Palace here in Minsk tonight – with Special Guest Ani Lorak. I joined Ewan and Sharleen from the ESC Insight for […]

It’s almost time for the Junior Eurovision Song Contest 2018! Eurovision Ireland’s own Richard will be out in Belarus giving us all the latest goings on at the Minsk Arena, and the rest of the team will be chipping in too! So what does our resident traveller and […]

For those of you that have already seen the official video, will realise Taylor Hynes is joined by some familiar Eurovision Song Contest alumni. Niamh Kavanagh (1993 Winner & 2010 Finalist) and Ryan O’Shaughnessy (2018 Finalist) join Taylor. For Ryan O’Shaughnessy, this will make a change to feature […]

The Online voting system that was introduced at last year’s Junior Eurovision Song Contest in Tbilisi, will return once more in Minsk. Details on when and how to vote, can be seen in the official EBU video below: Video: YouTube/EBU Author: Richard Taylor Source: EBU

In an unfortunate state of affairs yet again for TG4, the Irish entry for this year’s Junior Eurovision Song Contest has been revealed by Host Broadcaster BTRC. Last year, the Irish entry was revealed when the Official Album was released. Taylor Hynes will represent his nation with the […]

It’s just under a month to go till the Junior Eurovision Song Contest 2018, live from the awesome Belarusian capital Minsk! Of course, Eurovision Ireland will be there to cover the contest and give you all the goings on at the Minsk Arena – but until then, why […] 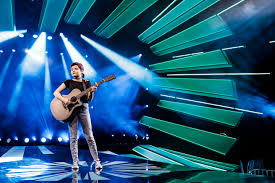 Tonight and every Sunday leading up to and including Sunday 11th November, TG4 will be showing the Irish National Selection at 20:30 GMT/21:30 CET. As with previous years, the National Selection has already been filmed and is been broadcast on delay. Video: YouTube/TG4 Eoghan McDermott returns as host […]

Last year, Muireann McDonnell represented Ireland at the Junior Eurovision Song Contest with her entry “Suile Glasa”. Muireann finished in 15th place, with a total of 54 points. On Tuesday night, the McDonnell family sat down to watch the Welsh National Final – Chwilio am Seren, one year […]

Back in August, Marija Spasovska was chosen by MRT to represent her country at this year’s Junior Eurovision Song Contest. Earlier today, Marija Spasovska revealed on her Instagram account that she’ll be singing the song “Home”. “Home” was written by Darko Dimitrov – responsible for the Macedonian entries […]

Tickets for this year’s Junior Eurovision Song Contest only went on sale last week – a total off 22000, however those allocated for the Sunday afternoon Grand Final have already Sold Out. A limited number of tickets are still available for Saturday 24th November and can be purchased […]

The Welsh National Final – Chwilio am Seren, for the Junior Eurovision Song Contest 2018 will be contended tomorrow night, LIVE on S4C at 20:00 GMT. The first round of performances will see all six finalists sing covers, before been reduced down to three by juries in Aberystwyth, […]