#BIRTHDAY: Simone de Oliveira from Portugal is 83 today Do you go to the contests, wherever they are held? Have you been to any? In particular, did you go to the fest in Portugal in 2018? If so, you may have witnessed something wonderful. If you were there, […]

#BIRTHDAY: Natasha St-Pier from France is 40 today Our friends in Canada keep trying to get in on the act, and who can blame them? One of its daughters even won once, so they, quite rightly, feel they have more claim to the winner’s podium than, say, Malta. […]

#BIRTHDAY: Svala from Iceland is 44 today

#BIRTHDAY: Svala from Iceland is 44 today Have you ever noticed any families taking part in our favourite TV show? We have had twins, siblings, and even a mother/daughter act. But as it’s been going 65 years, there’s the chance of dynasties emerging. Today’s birthday girl Svala Björgvinsdóttir […]

#BIRTHDAY: Svante Thuresson from Sweden is 84 today Some of you might have heard of a country in the north of our fair continent called Sweden. It’s taken part a few times in our favourite TV show. And they may have occasionally won too. It took Sweden eight […] 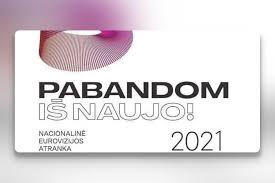 LITHUANIA: Pabandom iš naujo! has a winner! After four shows, the good people of Lithuania has picked a representative for the 2021 Eurovision Song Contest in Rotterdam in May. And that winner is… The Roop! With the song Discoteque The song won the jury vote… …and the televote […]

#LITHUANIA: Live Blog of Pabandom iš Naujo! Grand Final from 20.00 CET We’re almost there. Tonight the Baltic nation decides who will represent it at the Eurovision Song Contest in Rotterdam in May. Over the last three weeks, twenty acts have been whittled down to five, who will […]

#BIRTHDAY: Kejsi Tola from Albania is 29 today If you’ve ever got through your national final and represented your country at our favourite TV show, should you try again? There have been some performers who have got through more than once, and won after they’d fallen short the […]

#BIRTHDAY: Getter Jaani from Estonia is 28 today A stage show can be crucial in getting your song across to the voters of Europe and beyond. It can make a difference between getting three minutes, six minutes, or even nine minutes. So it has to make an impression. […]

#BIRTHDAY: Dana International from Israel is 52 today There have been just under 50 soloist winners of our favourite TV show, so that averages out at about one winner per week. Luckily, we have a solo winner today. But who? It’s a winner from the 20th Century, who […]

#BIRTHDAY: Dario Campeotto from Denmark is 82 today As you should know, there’s more to Eurovision than the contests of the 21st Century. We can go way back. Yes, even before 1995. There were contests in wondrous black & white, and that’s where we go today. Today’s birthday […]

#BIRTHDAY: Victor Crone is 29 today We know all about those false flaggers out there. They can provide a certain ‘je ne sais quoi’ to a contest, and there’s potentially the votes the country can get from the false flagger’s birth country. Today’s birthday boy Victor Crone (né […]

#LITHUANIA: Five more songs progress in Pabandom iš naujo! Broadcaster LRT got a little closer tonight to selecting a song for the 2021 Eurovision Song Contest tonight, after selecting five songs to join The Roop in the Grand Final of Pabandom iš naujo! on 6 February. Is there […]

#LITHUANIA: Live Blog of Pabandom iš Naujo! Semi-final from 20.00 CET Thunder and lighting! It’s getting exciting. In Lithuania anyway. After two heats, we have ten lucky semi-finalists competing for five spots in the Grand Final of Pabandom iš Naujo! next Saturday. The Roop are already there, but […]