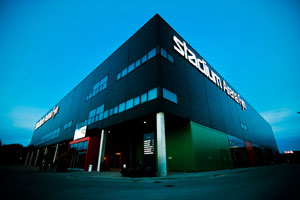 DR (Danish national broadcaster) and the host broadcaster of Eurovision 2014, have had their choice of many cities to host their National Eurovision Selection process. It had to be Herning as they missed out on hosting Eurovision 2014? Think again!

Today it has been announced that the city of Odense will host Dansk Melodi Grand Prix 2014. The Grand Final of the Danish selection will take place in the Fyn Arena on the 8th March 2014.

This must be another blow to Herning whom hosted Dansk Melodi Grand Prix 2013 exceptionally well and was pipped to the post to host Eurovision 2014 by Copenhagen.

The last time that Odense played host to Dansk Melodi Grand Prix was in 1993. DR are determined to show Eurovision viewers more that just Copenhagen this year when all eyes are on them!

The Fyn Arena is a sports and concert venue in the southeastern part of the Danish city of Odense. It has an area of 8,500 square metres (91,000 sq ft) and can accommodate 4,000 spectators at sporting events and 5,500 at concerts, where the floor is used.

Who will be the host country’s Eurovision representative in 2014? Big shoes to fill – oh but Emmellie didn’t wear any!