#LITHUANIA: #AllAboard for the Live Blog of „Eurovizijos“ at 20.00 CET

#LITHUANIA: #AllAboard for the Live Blog of „Eurovizijos“ at 20.00 CET

So, we’ve reached the last National Final of the 2018 season, and it’s in Lithuania. Broadcaster LRT has been building up to this night since 6 January, and six songs will battle to fill one of the last places at the 2018 Eurovision Song Contest in Lisbon.

Tonight’s winner of „Eurovizijos“ (to give it its short title) from Kaunas will be chosen by a 50/50 combination of jury and public voting. There will also be some acts performing tonight that we’ll see in Lisbon. But more of that later.

You can watch the action HERE.

And it’s started! Skamp (LT 01) opens the show. There will be a lot of Lithuanian flags in evidence, as it’s the centenary of the founding of the Republic of Lithuania.

Our two hosts appear to be in national costume rather than something very formal. They’re obviously very proud of their centenary, and who can blame them. 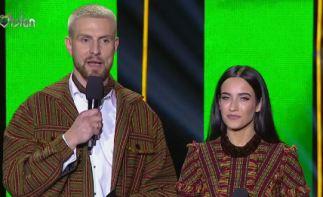 Bjelle is on now. She was with Skamp at the top of the show. It could be a while before we get to the competing songs tonight. She appears to be performing in front of footage of Vytautas Landsbergis. Back in Soviet days, he stood up to the Moscow government. And got a smooth transition to independence. 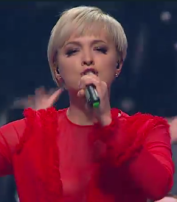 Our next guest is Ari who will be singing for Iceland in Lisbon. What a coup to get him to Kaunas!

We now appear to be starting Eurovizijos proper. The six acts in vignette form. Behind the scenes of the series of programmes on since January. The acts that have fallen by the wayside. You know the sort of thing. With ‘Birdie song’ as background music! The hosts have changed into more formal wear.

Before the first song, Fusedmarc come back and sing the song that they took to Kyiv in 2017. The lead singer has ditched red for black tonight. 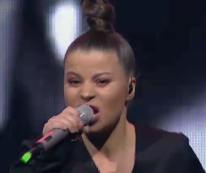 More chatter, and we get introduced to the jury members, whose deliberations will make up 50% of the final vote. They seem an eclectic bunch.

We then get the numbers for the public of Lithuania to vote on for their favourite.

Red dress alert – early this time. It’s a ballad that has a heavy piano influence to start with. As the camera pans back we see the whole act. MM is stood on a large rock/small mountain. Nice. The song itself is quite pleasant and seeks (I think) to demonstrate her range. However she gets a lot of help from her backing singers. It’s tricky being on first, but I don’t think this will be a winner tonight. 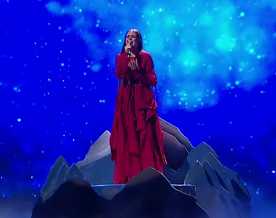 There’s more chat from some of the jurors about how they think things went.

Finger clicking, lots of choreography amd an interesting pair of John Lennon style spectacles. Kotryna’s influence is R&B, and I’ll give her her due. This has that sort of influence. There elements of what could be a Laura Tesoro vibe about it in the dancing. And maybe Witloof Bay too. It’s an OK song. And if it wins tonight a bit of work could do it wonders.

More jury chat, one of whom is Sasha Son. I didn’t recognise him.

A broadcast also wouldn’t be a broadcast without ad breaks and words from our gracious sponsors. Which happens now.

Back to the show, but before song three, we chat to Ari from Iceland and Saaara from Finland. They both tell us they’ll vote for Lithuania.

A quick look at the voting from the public at the moment, and Monika has a considerable lead over song 6 from Ieva and song 3 from The Roop. But only two songs have been on yet.

The Roop have gone for a more electronic based sound. The lead singer starts sat cross-legged on a plinth in the middle of the stage. Thinks Dami Im but without the sparkles. His performance reminds me a little of David Byrne from Talking Heads, so it may appeal to people of a certain vintage. The song bounces along nicely, but doesn’t really go anywhere. It could do with a key change at least.

More chatter, which seems slightly positive, from the jury.

It’s all black and white for Paula. It sounds like a song she could have written herself, but apparently a cast of thousands did. Her dancing is decidedly odd, but it’s probably to emphasise the fact she’s standing up for herself. To emphasise this more, the stool she was sat on at the start of the song is smashed to bits before our very eyes. It’s a noteworthy performance and gets a massive cheer. Perhaps the best-received song so far. 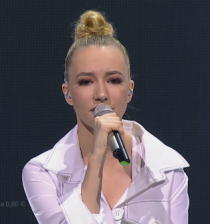 More jury chat before an update of the public vote. Monika still leads, but not by much over The Roop. Ieva (song 6) is a distant third. Paula is an even more distant sixth.

More finger clicks. Jurgis starts in silhouette, lit only by a single light box that’s moved around behind him. It’s different. The song is actually not bad. More than a hint of Justin Timberlake perhaps. The choreography with his three mates is very slick, without any detriment to the song. I think that should stand a chance.

The jury seem to really like the song. As does our male host.

Finally, Ieva goes all ballad on us. She’s sat on the stage in very demure fashion. The delivery of this song is very breathy in places, but she also has a very pure voice. During the song she stands, and a video on the backdrop plays of an elderly couple very much in love. It’s hitting a lot of the right buttons is this performance, and is very polished. I think they have saved the best for last here.

More chat, and then an update on the public vote. Ieva takes the lead over Monika as we watch it, with The Roop still third.

Songs over, so it’s interval act time at the Café Kaunas. We get Thundertale who seem to subscribe to the heavy metal genre. But a more friendly version of it.

Then we have a group of girls in short green shiny outfits and a girl with a ribbon on a stick. Talk about a mix of styles here.

Next we get our first recap of the night, even though the phone lines have been open all evening.

We now cut to public information. Charities in Lithuania are doing huge amounts to help those less fortunate. Perhaps they’re down on their luck, or a little less mobile. There’s been plenty of fund-raising for them and some of them are on stage. They’re all given bags of goodies. The chap in the wheelchair on the left of the photo below is a DJ, and proposes to his girlfriend (in the white jacket) live on stage. She accepts! And gets a big bunch of red flowers.

Another act for our delight now. It’s an unnamed young lady in blue. She has a funky dance routine with four strapping lads.

After chat from the Green Room, we get treated to Sasha Son. He sings his Eurovision song ‘Love’ in Lithuanian. Would you have recognised him?

More chat, including footage of our hosts over the previous weeks, getting things wrong, doing little dances and other hilarious out-takes.

The public voting has now closed, so we’re getting to the serious bit of the night. Are you excited?

After some quick messages from our sponsors, we get Saaara Aaalto on stage with her song ‘Monsters’. She has a selection of backing dancers with her, who were all probably helping her at UMK last weekend.

With the jury votes…

Votes from the public vote gets converted here…

The winner is Ieva Zasimauskaite!