Last week we looked at the lighting of a performance to see what a difference it made and I shared with you some of my favourite used of lights at Eurovision. This week I’m taking a look at the video projection that we see being used now to great effect to enhance performances in the contest. But in case you think it’s a very new thing to have a video wall behind the artists, think again. In 1968, the first contest to be broadcast in colour, there was a video wall that projected imaged behind the artists as they performed.

Admittedly it was not quite the same as we have today, an image of the artist was shown as they walked on the stage at the Royal Albert Hall, London and then projected a kind of smoky blue abstract image during the songs, but it was there nonetheless. I’m choosing three of my favourite uses of the video wall and sharing my thoughts with you… 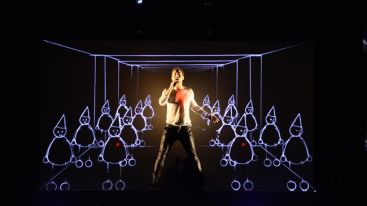 I mean, I kind of do have to start with this one! Now, I know a lot of people say it was style over substance that won the contest for Sweden last year, but if I am trying to suggest what a difference good use of video makes then this does exactly that.

We first see Måns on stage, on his own and very soon in to the song we meet ‘MP’, the little video stick figure that appears on stage and accompanies Måns through the rest of the song. MP is a representation of Måns himself and Måns plays the role of a friend who encouraged him through some dark and difficult times, proving that everyone can be a hero of their time. I loved it, I thought it was innovative and clever, something we’d not seen at Eurovision in quite this way before. Although others may disagree with me, the song does stand alone too, it doesn’t rely solely on the video to make it work. Twice I’ve seen Måns perform it live in front of me without video and I still love it just as much as I ever did. 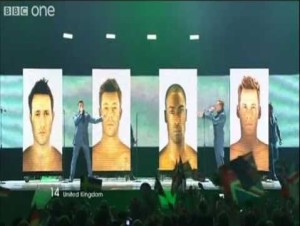 The huge arena in Düsseldorf plays host to the 2011 contest following Lena’s win the previous year. Ok the vocals were not the tightest they could have been by UK boy-band Blue but the way they used the video screens on stage, I think is absolutely brilliant.

The performance opens, actually in quite a similar way to what we saw back in 1968 with a video image of each of the guys on the four video panels on stage, with each member of the band stepping out from behind their image. Whilst the main video wall behind projects moving images on green and white bars to compliment the colour story of the lighting. The four video panels also show the letters I C A N during the chorus of the performance and towards the end of the song there’s a bit of double vision where we see the boys dancing on screen and live too. I thought this a really innovative performance and still see it as a proud moment for the UK in recent ESC history.

Ruth was most definitely once of my favourites for 2014, I was a big fan of hers all those year ago when she appeared on The X Factor and I was so excited to see her perform at Eurovision. The use of video in this performance is really quite subtle, nothing complicated but it just works so well with the story of the song.

For the most part actually it doesn’t change. The video is of slightly blurred rain falling on the huge video wall at the back it’s also projected on to the large cage structure on stage and I adore the little pools of water that splash on the video floor, Ruth is very much standing and singing in the middle of a rain storm. Except for the flashes of white to accentuate the beat of the song it pretty much doesn’t change for most of the song. Then during the final build to the last chorus the wall and floor is just pure white for maximum impact and then as the last notes ring out across the hall the floor video projects a moving reflection of the cage as though Ruth is now standing on a lake of water. Absolutely brilliant and one of my favourite Eurovision performances of all time.

What imaginative uses of video projection have captured your imagination? Which performances do you think will be creative with video this year? Share with us your favourites in the comments section below or on our Facebook page.