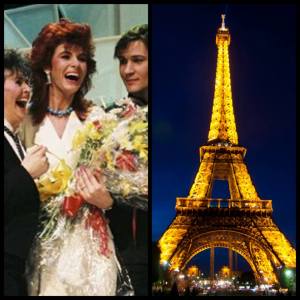 Just a quick piece or trivia for all you Eurovision fans out there but there are 2 celebrations happening today – One Irish and One French. The French one is considerably bigger – 324 meters to be exact!

However it is time for our firey woman “who has brains”  and a killer voice too to celebrate a special day. March 31st marks the 30th Anniversary of Linda Martin winning the Irish National Final first the first time back 984 with the song “Terminal 3”. The song would go on to narrowly miss out on winning the contest in Luxembourg – darn those gold booted Herreys from Sweden. Thanks to the RTE Archives for this clip of the last stage voting in the Irish National Final – See HERE. Watch out for the VERY young Louis Walsh!

The above video was Linda performing in Luxembourg later in the year at Eurovision.

But you can’t keep a good woman down (as we saw at Eurosong this year 😉 ) and she returned to the contest in 1992 and won Eurovision with another Johnny Logan song in Sweden of all places. I think you call that “Karma”. Linda won with “Why Me”

Our second anniversary today is the 125th birthday of that most famous French monument the Eiffel Tower. She is still looking good for her age and we just had to celebrate that fact with a look back at a French classic. Some might say Amina was robbed of Eurovision victory back in 1991 in Rome when she tied for first place with Sweden’s Carola. On countback Carola had more Top marks and was deemed the winner and thus Schlager music was revived in the 90’s. If the tie was in today’s final then Amina would have won as more countries voted for her and the song  “Le dernier qui a parlé”.

As your 125th birthday doesn’t come around that often, we though it only fair to give France another shout out from their past. Despite Amina missing out on a victory for France, they have won on 5 occasions and this one back in 1960 by Jacqueline Boyer is by far the most spirited of them all – “Tom Pillibi”

Will this be another year to remember at Eurovision for both France and Ireland? Who knows! As long as my “Flight’s on Time” I will be happy!