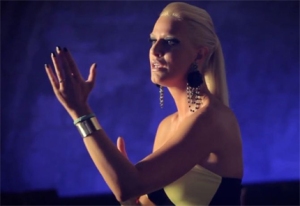 FYR Macedonia will be represented by the Balkan Blonde Bombshell (as we call her) Tijana Dapčević. To say that we were excited at this news was an understatement. We have longed for her to grace the Eurovision Stage. We have profiled her amazing and successful career already.

Today we have seen that she has released a new song in advance of her Eurovision entry. The song is called “Suze od pepela” or “Tears of Ashes”.

This a fantastic mid-tempo rock-pop ballad. Some wonderful guitar riffs coupled with Ms Dapčević strong voice, elevate this very radio friendly song. The subtle backing vocals are almost like a gospel choir. Real soul in this song. The song builds to that all important “Key Change” that we love at Eurovision.

However the real star here is how Tijana sells the song to the camera. The true mark of a successful artist is if they sing in a language that you don’t speak, but you believe every single word that they sing – well that is a gift that many artists don’t possess. I looked at the video of “Suze od Pepela” and I believed every single word that she sang.

If this was Tijana’s entry to Eurovision 2014, then I would be welcoming her to the Grand Final of the contest. This is an instantly memorable song with plenty of hooks to have you humming along to.

Am I excited to hear Tijana’s song for Eurovision now ?  Yes, even more so!

This is a fantastic song and may we juts say that Ms Dapčević looks stunning in the video. Enjoy this song and look forward to Macedonia’s song for Eurovision 2014.