DR – The Danish National broadcaster – have announced today the details of Dansk Melodi Grand Prix 2013. It looks like Denmark are pulling out all the stops to make sure that they send a potential Eurovision Winner to their neighbours in Sweden in 2013. 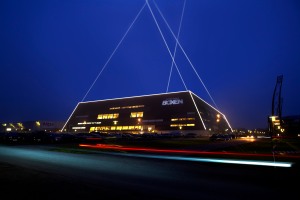 Stage designer, Claus Zier, has been discussing the details of how the arena will look and feel. Like Eurovision itself this year the audience will be up close and personal with the Stage, the Performers and the Presenters. The use of lighting and design will be critical in the shows presentation. The rear of the stage will be a giant LED screen in the shape of an Airplane tail wing from which will come a diamond-shaped stage.

The Green Room will literally be that – Green. Green flooring, sofas and lighting. This will be in another diamond structure right in the center of the arena. So there will be nowhere to hide for the performers. However this is what Eurovision is all about where the audience are just as much a part of the show as the performers.

Here is a picture of the interior of the Boxen Arena. It is a vast space to fill. 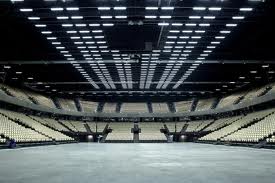 And this is the proposed stage plans for the show 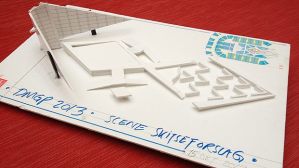 This is a national final of Eurovision proportions, so one has to congratulate Danish Broadcasters DR for their continued investment and support of Eurovision. They have made their national selection for Eurovision a major calendar event on Danish Television.

As to the performers in Dansk Melodi Grand Prix, we will have to be a little more patient but I am sure after seeing their arena they will be excited.